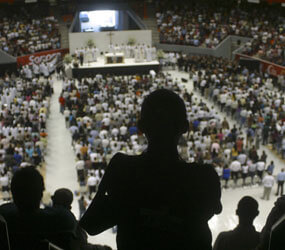 MEXICO CITY – The Catholic Church in Hermosillo, Mexico, has provided around-the-clock spiritual and material support to the families that lost children in a June 4 fire at a day care center that has claimed at least 44 young lives.

In addition, the archdiocesan health ministry has provided medical and psychological attention to burn victims, while the archdiocesan food bank and Caritas, the international Catholic aid agency have provided the mostly poor and working-class families with groceries, household items and transportation, he said.

Priests and others from the archdiocese led more than 100 religious services June 8 in parishes and funeral homes across Hermosillo, an industrial and agricultural center of 700,000 residents located 175 miles south of the Mexico-Arizona border.

The services followed a June 7 Mass celebrated by Archbishop Jose Macias Salcedo of Hermosillo in a sports complex for 10,000 people, who Father Cobacame said have rallied to support the families of the deceased children but have been distressed by the tragedy.

“We’ve never had such a painful event in this city that we can remember,” Father Cobacame said.

“The city is in total mourning … people are crying in the streets,” he said.

The death toll from the tragedy climbed to 44 June 8, while 20 children remained hospitalized – most with severe burns – the newspaper Reforma reported. Thirteen injured children were moved to hospitals in other parts of Mexico and in California that specialize in burn treatment.

Local officials said the fire in the day care center, operated under contract for the Mexican Social Security Institute, started in an adjacent storage facility after a failure in its ventilation system. The fire spread quickly and engulfed the center’s only working exit, trapping the children.

People familiar with the day care’s operation told local and national media that a second exit was locked, that the 8-year-old building was made of highly flammable materials and that fire extinguishers were not available. Still, the center received a passing grade in its most recent inspection, which Mexican Social Security Institute director Daniel Karam said was carried out in May.

Firefighters attempted to save the trapped children by hacking through the walls with picks. At least one driver resorted to ramming a concrete wall with his vehicle.

Aldo Munoz, a political science professor at the Jesuit-run University of Latin America in Mexico City, said allegations of corruption in the social security institute contracting practices have been rife. The institute provides health care and pensions for more than 50 million Mexican workers and is mainly funded through payroll taxes.

Father Cobacame expected some social unrest to follow the tragedy as sorrow turns to anger in Hermosillo.

“We know that in two or three weeks, we’re going to see a lot of outrage,” he said.