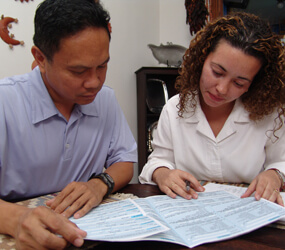 WASHINGTON – Churches have a crucial role to play in ensuring that everyone is counted on Census Day 2010, April 1.

That’s the message Alejandro Aguilera-Titus and Beverly Carroll of the U.S. Conference of Catholic Bishops’ Secretariat on Cultural Diversity in the Church are delivering as key point people in the USCCB’s partnership effort with the U.S. Census Bureau.

The numbers gathered in the 2010 census will determine representation in Congress and the allocation of more than $400 billion in annual federal funding for local schools, roads, parks and other services.

“Historically we know there are three major communities that are difficult to count – the new immigrant, those who are isolated due to little knowledge of English and the low-income,” said Aguilera-Titus, assistant director for Hispanic affairs in the cultural diversity secretariat, in an interview with Catholic News Service Oct. 27.

But with 19,000 parishes and thousands more social service agencies, health care facilities and educational institutions around the country, the Catholic Church is in a unique position to reach many of those people and to convince them that it’s important to be counted, said Carroll, assistant director for African-American affairs, in the same interview.

“Our parishes, our centers, our outreach captures the attention and participation of many people, and the church has a particular role in working with communities and being supportive of political activities that supports the needs of our people,” she said.

Particularly among communities that are hard to reach and hard to count, “we have a certain credibility, so people would be more apt to be listening,” Carroll added.

Aguilera-Titus said the key to a smooth and efficient Census Day is trust. Those who are being counted must trust that their information will not be passed along to other federal agencies or made available to their neighbors.

“Churches can help to generate that level of trust,” he said, and can also provide concrete assistance such as help with the census form or with finding language assistance for those who need it.

People also need to know that the census will not be a complicated or time-consuming endeavor for them, Aguilera-Titus said. With only 10 questions, it is one of the shortest questionnaires since the U.S. census was first taken in 1790.

Archbishop Jose H. Gomez of San Antonio, chairman of the USCCB Committee on Cultural Diversity in the Church, said the statistics gathered in the census can serve much more than governmental purposes.

“The U.S. census is a useful tool for learning about God’s people, who and where they are, and many other facts that shed light on their lives, possibilities and struggles,” the archbishop said in a statement.

“A church that seeks to evangelize is characterized by outreach,” he added. “The U.S. census gives us important information to do that.”

Required once every 10 years by the U.S. Constitution, the census aims to count every person residing in the United States on April 1, 2010. This includes all 50 states, the District of Columbia, American Samoa, the Commonwealth of the Northern Mariana Islands, Guam, Puerto Rico and the U.S. Virgin Islands.

Hundreds of faith-based organizations, community and nonprofit groups, schools, corporations and government agencies have signed up as partners in the census effort, under the theme “It’s in our hands.”

But some groups fear that a move by two Republican senators could derail the entire census process.

Sens. David Vitter, R-La., and Bob Bennett, R-Utah, have proposed an amendment to the census funding bill that would block all funds unless the census includes a question about citizenship and immigration status. With census forms already in the printing process, there is little chance of meeting the April 1 Census Day target if new forms have to be printed.

The proposed amendment has drawn strong criticism from Hispanic groups. The National Association of Latino Elected and Appointed Officials called it “an unconstitutional and costly effort to suppress Latino participation in the decennial census.”

The U.S. Constitution requires that topics to be included in the census be submitted to Congress three years before the census takes place, the association noted.

“By making intrusive inquiries into immigration status, the Vitter-Bennett amendment would raise concerns among all residents – both native-born and immigrant – about the confidentiality and privacy of information provided to the Census Bureau,” the association added in a statement.

Aguilera-Titus said the USCCB has not taken a stand on the amendment but believes generally that “the census should be conducted in such a way that everyone is counted” and that “anything that would limit that might be problematic.”

However the debate over the Vitter-Bennett amendment is resolved, one thing seems certain: No matter how smoothly the census goes, some will question the numbers it comes up with.

But that kind of questioning is deeply rooted in American history. When the first census was taken on Aug. 2, 1790, according to historical notes from the U.S. Census Bureau, both President George Washington and future President Thomas Jefferson “expressed skepticism over the final count, expecting a number that exceeded the 3.9 million inhabitants counted in the census.”