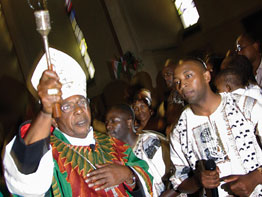 NAIROBI, Kenya – Catholic leaders in Chad, Sudan and Djibouti have appealed for more priests and religious.

“We are looking forward to respond to the extended request in the best way possible. We may not be self-reliant on the issue but we definitely could share a little with others” who might not have as many priests and religious as Kenya does, the cardinal said July 12 during an ordination Mass of three priests in Nairobi.

In an earlier e-mail to Catholic News Service, Bishop Giorgio Bertin of Djibouti said the Horn of Africa is in desperate need of Catholic pastoral services.

Bishop Bertin, who is also the apostolic administrator of Mogadishu, Somalia, said in the July 11 e-mail that Djibouti needs priests and teachers.

The pastoral life in Djibouti is that of typical Muslim-majority countries, where evangelization is through service in the fields of education and of charity, he noted.

“It is a mission for the Muslims: They, too, need to meet the Gospel by encountering dedicated and humble missionaries,” he said.

He noted that the Catholic population in Djibouti is composed of around 5,000 foreigners, mostly from France.

“In Somalia it is another story: Here at the moment we (the Catholic Church) cannot be permanently present because of the lack of law and order,” he said, adding that “only the return of a real central government will open the possibility for the church to be once more present in Somalia.”

Bishop Bertin said a missionary presence in Djibouti, and especially in Somalia, it is not an easy task.

He explained there are no congregations of religious in Somalia; in Djibouti there are fewer than 30.