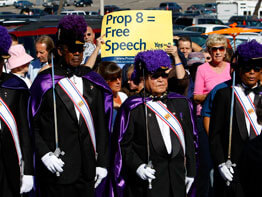 WASHINGTON – In voting on 2008 ballot questions across the country, the Catholic Church’s view against same-sex marriage prevailed, but most Catholic efforts to influence voting related to abortion, assisted suicide, embryonic stem-cell research and gambling failed.

Voters approved California’s Proposition 8, which would amend the state constitution to define marriage as the union of one man and one woman, by a 52 percent to 48 percent margin, although opponents said the counting of absentee ballots could change the outcome. Similar proposals were approved in Arizona (57 percent to 43 percent) and Florida (62 percent to 38 percent).

Cardinal Roger M. Mahony of Los Angeles thanked the Catholic community for the passage of Proposition 8 in a Nov. 5 statement. He said the success also was the result of “an unprecedented coalition of many faith communities and other citizens who understood the importance of maintaining the bedrock institution of marriage as has been lived out since recorded history.”

California is one of three states where same-sex marriage is currently allowed, and the California bishops had said the amendment would affirm “the historic, logical and reasonable definition of marriage” without removing any benefits from other contractual arrangements such as civil unions or domestic partnerships.

On a range of other issues, however, voters turned down the church-supported position on ballot questions.

In Connecticut, where the Supreme Court ruled Oct. 10 that the state’s ban on same-sex marriage was unconstitutional, 59 percent of voters turned down an effort to call for a constitutional convention, where the question could have been reconsidered. The state’s Catholic bishops had urged a vote in favor of the convention.

By a 47 percent to 53 percent margin, California voters rejected a church-supported proposal to require parental notification, or a judicial bypass, 48 hours before a minor’s abortion. A South Dakota measure that would have banned abortions in the state, except for victims of rape and incest, also failed, 55 percent to 45 percent.

In Colorado, Catholic leaders had taken a neutral approach to the Colorado Personhood Amendment, which would have defined “any human being from the moment of fertilization” as a person under the state constitution. Voters rejected the proposed amendment, with only 27 percent for it and 73 percent against it.

The Colorado Catholic bishops said the proposal did not “provide a realistic opportunity for ending or even reducing abortions” in the state because it would be interpreted under current federal law and could have resulted in a reaffirmation of Roe v. Wade, the Supreme Court’s 1973 decision legalizing abortion.

Washington became the second state in the nation to allow physician-assisted suicide with a 59 percent to 41 percent vote in favor of Initiative 1000. The state’s Catholic bishops had said the proposal did not have adequate safeguards and its approval would threaten “the dignity of all human life regardless of frailty or social definitions of usefulness.”

The results were mixed on proposals to expand opportunities for gambling in Maryland, Arkansas and Ohio.

A move to allow up to 15,000 slot machines in Maryland, with funds targeted for use in public education, had been strongly opposed by Catholic leaders but was OK’d by voters, 59 percent to 41 percent. The Catholic Conference of Ohio had opposed a proposal in that state to permit one privately owned casino in southwest Ohio, and it failed, 37 percent to 63 percent.

Bishop Anthony B. Taylor of Little Rock, whose diocese covers the entire state of Arkansas, had not announced his position on a ballot question that would have authorized a state-run lottery to aid higher education. It was approved by a 64 percent to 36 percent margin.

Bishop Taylor also took no public stand on another, more controversial state proposal. Act 1, a legislative initiative, would ban unmarried couples from serving as adoptive or foster parents in the state. It was approved by 57 percent of state voters, with 43 percent opposed.

By a margin of 63 percent to 37 percent, voters in Ohio followed the advice of the state Catholic conference in agreeing to keep interest on “payday loans” capped at 28 percent. If the proposal had not been accepted, the rate for such loans could have risen as high as 371 percent.

California Catholic leaders had urged voters to defeat Proposition 6, the so-called “Safe Neighborhoods Act,” which would have increased penalties for gang crimes and eliminated the possibility of bail for illegal immigrants. It failed, 30 percent to 70 percent.