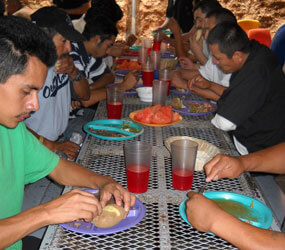 NOGALES, Mexico – Victor Hernandez Martinez, a blacksmith with his own business near Seattle, was on his third day at the “Centro para Atenci›n a los Migrantes Deportados,” the Center to Help Deported Migrants, a few hundred yards inside the Mexican border from Arizona.

In fluent English, Hernandez explained how he had been stopped by U.S. immigration inspectors at the border at Tijuana as he returned home from a trip to his native state of Veracruz in east-central Mexico for his great-grandfather’s funeral.

Instead of being at work in Seattle, Hernandez was among about 75 men having a hearty breakfast at the “comedor,” or dining room, run by the Kino Border Initiative, a collaborative effort of the Jesuit provinces of California and Mexico, the Diocese of Tucson, Ariz., the Archdiocese of Hermosillo, Mexico, Jesuit Refugee Service and the Missionary Sisters of the Eucharist.

This day in mid-July, several of the men at breakfast had similar stories of being kept out or deported from their longtime homes in the United States. Abisai Castro pulled out his ID card from Healdsburg High School in California and explained that he was partway through his junior year there two years ago when he was arrested for investigation of a fight at school.

He was never charged over the fight, but while he was detained, Immigration and Customs Enforcement officers took him away after it was discovered he was in the country illegally. He was brought to the United States by his parents at the age of 8 from Oaxaca in southern Mexico but had not been back in nine years.

Now 19, Castro said after he was deported he tried to make a go of it with his uncles in Oaxaca but could not fit in or find work, so he started for his home in California. He got caught by the Border Patrol in Arizona after three and a half nights spent walking across the desert, part of a group of 24 people. His family had promised to pay a smuggler $2,000 to get him to California.

Hernandez also had been in the United States since childhood.

“My dad crossed (the border) with me when I was 6,” Hernandez said. “I grew up in California. I have a business in Seattle. People work for me.”

Hernandez said he’s a legal resident of the United States, but that someone apparently stole his identity and got into trouble with the law while using it. When he approached the Tijuana border crossing, “they said my papers are not valid,” then put him on a bus for Nogales, about a seven-hour drive away.

Particularly during the hot summer months when the risk is high of dying during an attempt to cross the harsh desert, the Border Patrol strategy is to bring people caught in one jurisdiction to a more distant point in Mexico. The theory is that this discourages people from turning around and trying to cross again at the same place, or from reconnecting with the smugglers who were supposed to get them through. Some people who are caught are flown back to their home states in Mexico.

Hernandez said his wife in Seattle has hired a lawyer to try to straighten out his situation. But in the meantime, with little money, he had to ditch the belongings he traveled with and was eating at the “comedor.”

There, volunteers serve two hearty meals a day and provide basic medical care and clothes or shoes to those who need them.

On this morning, breakfast included beans, tortillas, baked potatoes, green chili, bread and watermelon. Lunch included beans and fried chicken prepared by a woman in Phoenix and sent down in coolers with parishioners of St. Francis Xavier Parish, who help serve breakfast and bring lunch once a month.

Most days, outside the dining room, volunteers from another organization, No More Deaths, give people a chance to make a free phone call or two. Some are trying to arrange to go home, whether in Mexico or the United States, others are simply trying to figure out what to do next.

Down the road a bit, a small shelter run by the Kino initiative provides beds and other services for women and children. Men who need a place to sleep might find room at one of several charity-run shelters in town. Others sleep outdoors at a small fenced-in shrine at the border with a statue of Our Lady of Guadalupe and a banner from No More Deaths.

At the Kino initiative’s offices in Nogales, Ariz., work also includes public education about the border in light of Catholic social teaching, with workshops offered in parishes on both sides of the border and curriculum made available for parishes, high schools and universities.

A third component of the initiative is research and advocacy on behalf of fundamental human rights and comprehensive immigration reform.

Jesuit Father Sean Carroll, director of the Kino Border Initiative, explained the origins of the dining room: It came out of the charitable efforts of a couple of Nogales, Mexico, women who started bringing food to the people they saw hanging around a highway underpass near the border after they were dropped off by the U.S. Border Patrol.

Eventually, the Mexican city of Nogales and the state of Sonora kicked in some money to dig out a bit of a nearby hillside to make space for the dining room. With the help of a couple of paid Kino staff members, some Jesuit seminarians who spend a few weeks at a time at the project and volunteers from a handful of parishes in Nogales, Phoenix and Tucson, the kitchen this winter served as many as 250 meals a day, said Father Carroll.

The average this summer has been about 150 meals, a reduction accounted for in part by the summer heat cutting down on cross-border traffic and partly by the Border Patrol flights that return people to their home states, he said.

Ricardo Avila, a native of El Paso, Texas, who is in formation for the Jesuits’ New York province, was helping with breakfast, part of a five-week stint with the Kino initiative. Though he grew up within miles of the Mexican border, he said the experience working in Nogales really brought home the impact of the border wall on migration.

“For a religious person, about to take a vow of poverty, this has been a real example of what it means to go without and to take a leap of faith.”