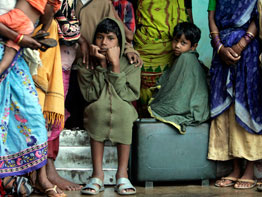 NEW DELHI – The Catholic Church in India has petitioned the country’s Supreme Court to protect Christian lives and property in Orissa state.

Archbishop Raphael Cheenath of Cuttack-Bhubaneswar told the Asian church news agency UCA News Sept. 2 that the church decided to approach the highest court “as we are not getting sufficient response” from the Orissa government.

The archbishop, whose archdiocese is in Orissa, said the church wants the court to order federal authorities to protect Christians in the eastern state.

“We want some clear help and response” from the government, added the archbishop, who has stayed in New Delhi since the violence broke out in Orissa Aug. 24.

The church petition seeks the deployment of sufficient riot police in villages where Hindu extremists continue to destroy churches and Christian buildings. It also demands that the Central Bureau of Investigation, the country’s criminal investigative agency, probe the violence.

In addition to its regular judicial duties, the Supreme Court of India can take action if individuals file a petition with a question of public importance that needs the court’s involvement.

Archbishop Cheenath said the attacks have now decreased, since “there are no more targets to attack.” But in several villages Christians reportedly have been forced to sign documents declaring they are Hindus and have been asked to destroy their churches and other Christians’ houses afterward.

The archbishop told UCA News all Christian institutions have been destroyed in the Kandhamal district, the worst-hit area of Orissa. The violence began there after suspected Maoists gunned down an 85-year-old Hindu religious leader and five associates Aug. 23. Hindu radicals targeted Christians, claiming they had masterminded the killings.

A probe into the situation by the Central Bureau of Investigation is necessary because “there seems a hide-and-seek game” in the whole matter, especially regarding the Hindu leader’s killing, said the archbishop.

“Let the truth come out and the guilty be punished,” he said.

The state government has ordered a judicial probe, but the archbishop said the church suspects this report would be biased against Christians.

The church also wants India’s National Human Rights Commission to study the Orissa violence. He recalled that the commission went to Orissa when Christians were attacked in Kandhamal last Christmas, but the state administration did not allow commission members to visit the affected villages.

Archbishop Cheenath said the church petition also asks that individuals be compensated for their losses, such as $9,000 for fully destroyed homes and half that amount for damaged homes.

He welcomed media reports about the prime minister promising relief packages and compensation from his emergency fund for the Orissa victims.

“But all this should be implemented in reality,” he added.

Archbishop Cheenath said he sees the attacks as the fruit of “hate campaigns” Hindu radical groups have carried out in Orissa for the past 25 to 30 years. People “are poisoned and have lost their capacity to think correctly,” he added.

Political parties allowed the radical groups to grow for the parties’ vested interests, and “now they can’t control them,” he said.