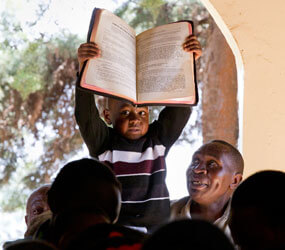 At a Vatican news conference March 4, Archbishop Nikola Eterovic, the synod official, presented the “lineamenta” or outline for the 2012 general Synod of Bishops.

The 65-page outline is a reflection on various aspects of the theme “new evangelization” and includes dozens of questions about current needs and practices; bishops’ conferences are supposed to answer the questions by Nov. 1 so their responses can be used as a basis for the synod’s working document.

The synod is scheduled to meet at the Vatican Oct. 7-28, 2012; Pope Benedict XVI chose the theme, which was announced just a few months after he established the Pontifical Council for Promoting New Evangelization.

The synod outline defines “new evangelization” as “the courage to forge new paths in responding to the changing circumstances and conditions facing the church in her call to proclaim and live the Gospel today.”

Archbishop Eterovic said the most immediate aim of new evangelization is to help people who already are baptized, but do not practice the faith, rediscover the joy of believing and actively living their faith. It also includes reminding them and all Christians of the obligation of witnessing the Gospel and proclaiming it to others.

“Christian witness must be both private and public, embracing one’s thoughts and actions, the way of life inside Christian communities and their missionary outreach, their educational action, charitable activities and their presence in contemporary society in order to communicate the gift of Christian hope,” the archbishop said.

Although it did not specifically mention the sex abuse crisis, the document said one fruit of evangelization “is the courage to speak out against infidelity and scandal which arise in Christian communities as a sign and consequence of moments of fatigue and weariness in the work of proclamation.”

A true and lively faith gives individuals and entire church communities the ability to recognize their faults and sins, seek repentance and begin all over again, witnessing to the fact that conversion and salvation are possible in Christ, it said.

By calling for a “new evangelization,” the church is not criticizing the way the faith was initially transmitted, the document said, but rather it is recognizing that it needs to find new ways of proclaiming the Gospel that respond to the needs of people who are living in modern societies where anything involving God or faith is considered naïve or too private for polite conversation.

The document also said new evangelization is essential where the media tend to preach instant gratification, where population shifts have meant the disappearance of “Catholic countries,” and where science and technology have become so advanced and seemingly able to accomplish anything and everything that science is the god people go to when they’re hurting or confused.

Catholics, it said, “must know how to speak in ways that are intelligible to our times and proclaim, inside these areas, the reasons for our hope, which bolsters our witness.”

The document emphasized the importance of giving the baptized a solid education in the basics of the faith and in helping nourish their faith with the Eucharist and the Bible, especially through good preaching at Masses.

While the synod outline said Christians must always act in a way that witnesses to the faith and cannot be afraid to tell others about Christ, it also said dialogue with members of other religions can help Christians learn more about the shared human yearning for God and for meaning; the more Christians understand the desires of the human heart and how they are expressed today, the more easily they can respond, it said.