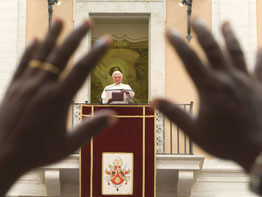 VATICAN CITY – Pope Benedict XVI warned that racism is alive in modern society, and he urged the church to help overcome all forms of racial intolerance.

He said racism today is often tied to economic and social problems. Although such problems may be real, they can never justify racial discrimination, he said Aug. 17.

While the pontiff did not mention specific countries, his words had an immediate echo in Italy, where a series of government actions against illegal immigrants have prompted strong debate inside and outside the church.

The pope, addressing pilgrims at his summer residence in Castel Gandolfo outside Rome, began his remarks by quoting the prophet Isaiah about the “foreigners” who will be included in the Lord’s universal house of prayer.

Likewise, the pope said, the church today is made up of people of every race and culture, and part of its mission is to help forge bonds of communion between races.

That task includes “helping civil society to overcome any possible temptation to racism, intolerance and exclusion,” he said.

“One of humanity’s great achievements is, in fact, overcoming racism,” he said.

The pope said in various countries signs of racism were often tied to social and economic problems, which could “never justify racial contempt and discrimination.”

The pope asked for prayers so that mutual acceptance may grow in the world.

In Italy, some Catholics have criticized the government’s new crackdown on illegal immigration and other security measures, saying they are racially discriminatory.

Some of the strongest criticism came after the government, led by Prime Minister Silvio Berlusconi, announced plans to fingerprint every Gypsy who lives in Italy. The Catholic magazine Famiglia Cristiana, Italy’s top-selling newsweekly, said the plan was evidence of a “creeping racism.”

In mid-August, Famiglia Cristiana stepped up its criticism of the Berlusconi government, saying in effect that officials were provoking a “war among the poor” instead of dealing with Italy’s real criminal problems. The comments prompted an outcry.

On Aug. 14, the Vatican spokesman, Jesuit Father Federico Lombardi, said that while Famiglia Cristiana was an important Catholic magazine, its views represented its own editorial line and not necessarily that of the Vatican or the Italian bishops.

Members of the political parties that form the governing coalition said the spokesman’s statement represented a clear distancing of the Vatican from the magazine’s criticism.