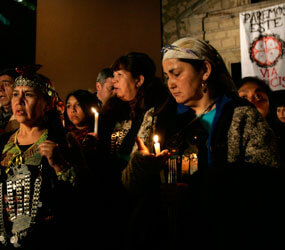 SANTIAGO, Chile – Weeks before the attention of the world shifted to the saga of 33 trapped miners in northern Chile, the story of 34 jailed indigenous Mapuche Indians on a hunger strike was unfolding in obscurity in the South.

But Chilean President Sebastian Pinera enlisted the Catholic Church to act as mediator and help bring the strike, which began July 12, to an end.

Although the strike continued into late September, the decision to involve the church appears to be paying dividends: The Mapuche strikers have whittled down their list of demands to just three points, said Archbishop Ricardo Ezzati Andrello of Concepcion.

To end the strike, the prisoners demand “not to be judged by a military court, not to be charged with the anti-terrorist law and not to be accused by anonymous witnesses during the trial,” Archbishop Ezzati said.

At the center of the hunger strike is the government’s use of an anti-terrorism law on the books since the 1974-1990 dictatorship of Gen. Augusto Pinochet. The government charged the Mapuche under the law for occupying private land and forestry company installations and destroying company equipment.

The law enables the state to detain people for up to two years without charges and to place restrictions on access to evidence.

The government has responded to the Mapuche strikers’ demands with proposals to modify the anti-terrorism law, but not abolish it outright. Pinera has also emphasized his Plan Araucania, meant to address the economic and social inequalities that have plagued the Mapuche community for generations.

Despite these efforts, the dialogue has stalled over the law, underscoring the government’s lack of a clear policy regarding the country’s indigenous population, said Marta Lagos, a pollster and political analyst in Chile.

“This is the end of the road of a series of missteps, the absence of a public policy and disregard for the Mapuche people over 500 years,” Lagos said. “I think the Catholic Church can always help. It wouldn’t be the first time it has acted as the final link so that things end positively for all involved.”

Pinera is saddled with addressing Mapuche claims of disenfranchisement, which successive governments have failed to address. But perhaps most pressing of all is the health of four strikers who have been transferred to a hospital because of their deteriorating health.

“If there is a fatal outcome, the government of Chile will be the guilty party,” said Natividad Llanquileo, spokeswoman for the prisoners outside a prison in the southern city of Concepcion.

So far, Archbishop Ezzati has been unable to draw the two sides into an open dialogue amid government refusal to bend to Mapuche demands on the anti-terrorist law and an unwillingness on the part of Mapuche prisoners to negotiate with government officials.

While ministers in Pinera’s government have criticized the prisoners for continuing their hunger strike and putting their health at risk, Mapuche officials have accused the government of making a spectacle of the standoff.

“Breaking through the distrust isn’t easy,” Archbishop Ezzati said. “But it is indispensable to opening dialogue. The solution is in the dialogue, so my call is to break through that wall of distrust.”

The current standoff is simply the latest display of mistrust built over centuries.

About one-third of Chile’s 650,000 Mapuche, or “people of the land” in their language, live in rural communities in the impoverished south-central Araucania region.

After fending off Spanish colonizers for generations, the Mapuche lost lands to the newly formed states of Argentina and Chile in the early 19th century.

Hundreds of thousands of hectares of land have been returned to the Mapuche under a 1993 law, including 1.6 million acres under former President Michelle Bachelet, but the Mapuche say the government has not gone far enough.

The legislature met in late September to discuss changes to the anti-terrorism law but failed to reach an agreement. The prisoners may be forced to wait up to 10 days before the legislature revisits the controversial law.

Pinera’s ministers continue to press the Mapuche prisoners to end the strike for the sake of their health, while pursuing a legal resolution to the conflict. However, Archbishop Ezzati has urged an alternative because the prisoners’ pressing health concerns cannot wait for the political process to take its natural course.

“Sitting down at the table doesn’t destroy the authority of anyone and it dignifies everyone,” Archbishop Ezzati said. “The legislative path to resolving this problem is more difficult … that is a long time for the Mapuche and their health.”