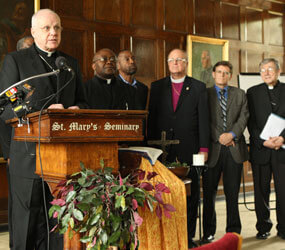 Saying that Baltimore City was crucial to the survival of the Archdiocese of Baltimore, Archbishop Edwin F. O’Brien launched an anti-violence initiative with other local faith leaders May 27 at St. Mary’s Seminary and University in Roland Park. .

“We all agree that the violence that is so pervasive in our city neighborhoods must be addressed,” said the archbishop during a news conference after a 90-minute meeting with various city officials.

Acknowledging that the police department can’t solve the issues alone, the faith leaders pledged to take a more active role in curbing violence on city streets.

“We have all presided at too many funerals and consoled too many families whose sons, daughters, brothers and sisters, and mothers and fathers who are cut down prematurely by inexcusable violence,” the archbishop said. “It is our hope that our discussion today will promote a foundation for a longterm partnership that will lead to further dialogue among people at all levels of our faith communities and ultimately the systematic reclaiming of our streets, starting this summer.”

Many of those leaders, including Bishop Madden, met last month with Baltimore City Police Commissioner Frederick H. Bealefeld III to discuss their role in reducing violence in the city.

After the news conference, Bishop Madden gathered with youth and adult representatives from city parishes and discussed ways to attain peace in the city.

Religious leaders called on city officials to keep parks, recreation centers, libraries and pools open during summer months when most schools are not in session.

The group also said they would encourage other churches, mosques and synagogues to designate areas for job sites for the city’s YouthWorks program, as well as centers and other programs that can be havens.

The archbishop is asking all parishes and other local faiths to designate the weekend of June 19-21 as a “peace Sabbath.” Masses that weekend will include prayers for peace. Parishioners will also be asked to donate $1 during an archdiocesan-wide collection that will promote peace initiatives, such as Safe Streets. The program is hosted by three city parishes – St. Veronica of Cherry Hill, St. Wenceslaus and St. Ann – and aims to promote a reduction of gun violence.

“I’m writing our pastors throughout the archdiocese, and we go 200 miles west of Baltimore, to join in this,” the archbishop said. “We all have a stake in the welfare and the health of our kids in Baltimore and the future our city of Baltimore.”

Numerous pastors from the city’s Catholic parishes also lent their voices of support.

“We want to start those up again,” Monsignor Nalepa said. “There’s an interest for people to do something. They’re fed up and saying enough is enough with this violence.”

The day of meetings and consultations came after Bishop Madden’s office surveyed 91 people on peace issues.

Only two out of 53 youth respondents said peace can most effectively be taught by the church. None of the 28 adult respondents, of the 81 people who answered the question, felt the church could teach peace most effectively. The most popular response for effective peace teaching was “in the family.”

Next week, The Catholic Review shares the stories of people trying to make a difference in their Baltimore City neighborhoods and how the archdiocese is moving forward with information learned from recent meetings.