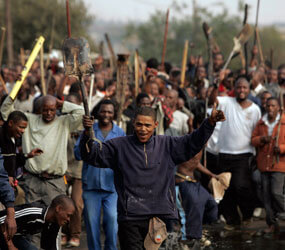 CAPE TOWN, South Africa – While human rights activists express fears that xenophobic attacks will erupt in South Africa after the soccer World Cup, church leaders are taking action to see that this does not happen.

A delegation of religious leaders, led by Johannesburg Archbishop Buti Tlhagale, president of the Southern African Catholic Bishops’ Conference, raised concerns about the possibility in a meeting with South African President Jacob Zuma.

“We are confident that the security services will act very swiftly if there are outbreaks of violence,” Father Chris Townsend, conference communications officer, said in a July 5 telephone interview from Pretoria. “These are rumors and we hope that they prove to be false.”

More than 60 people were killed and more than 30,000 people were displaced in attacks on foreigners around South Africa in May 2008.

The National Religious Leaders’ Forum, which includes Muslim, Jewish, Buddhist, Hindu and Ba’hai leaders as well as officials of Christian churches, met with Zuma, Deputy President Kgalema Motlanthe and other government officials in Pretoria July 1 to discuss the possibility of xenophobic attacks after the World Cup. The leaders also discussed sustaining the spirit of unity generated by the tournament, moral regeneration, relationships between religious leaders and the government, and other issues.

Father Mike Deeb, director of the bishops’ justice and peace department, said his department will run training workshops in dioceses around the country “on how to respond to xenophobia.”

Noting that “there has been talk that there will be xenophobic attacks after the World Cup,” he said, “we need to find out who is making these threats and get the police involved.”

He also said he hoped the Peace Cup, a Catholic-inspired tournament that gives soccer players from different social classes, ethnicities and national origins the chance to play together, would help prevent xenophobia as people get to know each other.

Verona Father Thulani Manana said that Zola Holy Cross Parish, one of the Soweto parishes he serves, organized soccer matches for elderly men and women as well as for mixed teams of boys and girls, “which promoted a unified spirit of celebration.”

South Africa’s hosting of the World Cup “has unified people in the township” of Soweto, where there had been “a lot of xenophobia,” Father Manana said in a report published in the South African Catholic newspaper, The Southern Cross.

“One has a real sense of celebration for the whole African continent,” he said, noting that “for the first time, people are speaking openly about xenophobia and all the tensions that went before.”

The World Cup “is most certainly a unifying factor with good implications for nation-building,” Father Manana said.

Noting huge South African support for the Ghanaian team that made it through to the quarterfinals, Cardinal Wilfrid Napier of Durban told The Southern Cross that the fact that South Africa’s national team “didn’t make it past the first round perhaps is a blessing in disguise, as I believe it has made South Africans move away from a kind of national chauvinism, seeing the tournament as African and not just South African.”

In an editorial, The Southern Cross said that while South Africa has “generated a tremendous amount of good will and respect across the world by welcoming the globe’s population to a well-organized and most congenial World Cup,” the country “will relinquish much of that respect and affection if the threat of renewed xenophobic violence is realized, as experts in the field warn.”

It said that “throughout South Africa, refugees and migrants have been told to beware of attacks once the international spotlight turns from the country.”

At a late-June meeting of 40 nongovernmental organizations in Cape Town, Miranda Madikane, director of the Scalabrini Center of Cape Town, which works with refugees and migrants, said 68 percent of refugees surveyed at the center reported receiving death threats.

“It is important that the authorities take these threats seriously and that action be taken to address the concerns,” Madikane told the meeting, reported The Southern Cross.

Ten million people are estimated to have come to South Africa seeking a better life since apartheid ended in 1994.