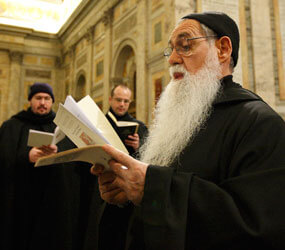 VATICAN CITY – Getting a new generation involved in ecumenism will require the churches to show them how efforts to build church unity fit in with young people’s concerns for a broken world, a young Presbyterian minister told a Vatican symposium.

“It is clear ecumenism will be different. It has to be because of globalization,” said the Rev. Neal D. Presa, a 33-year-old minister from New Jersey.

Rev. Presa was one of the representatives of the World Alliance of Reformed Churches participating in a Vatican symposium Feb. 8-10 to discuss achievements made in ecumenical dialogue and to trace out possibilities for the future of work for Christian unity.

Sponsored by the Pontifical Council for Promoting Christian Unity, the meeting focused on and took its name from “Harvesting the Fruits,” a book compiled by Cardinal Walter Kasper, council president. The book summarized the results of 40 years of official Catholic dialogues with the Anglican Communion, the Lutheran World Federation, the World Methodist Council and the World Alliance of Reformed Churches.

In an interview Feb. 10 at the Basilica of St. Paul Outside the Walls, where participants closed their symposium with a prayer service, Rev. Presa said most young people today “are asking why the church even matters.” They may be Christians, but denominational membership is not as important to them as involvement in efforts to promote peace, justice, solidarity and care for the environment, he said.

“After 9-11 and with all the human suffering that has been magnified after so many events around the world – economic, environmental, political – my generation, young people,” willingly cross denominational and religious boundaries “in order to work toward a better world,” he said.

Church leaders have to help the young see that “in a world that is broken, marked by fragmentation, we are seeking unity. And that’s a powerful witness,” he said.

Rev. Presa said the symposium suggestion of drafting ecumenical commentaries on the Apostles’ Creed, the Ten Commandments and the Lord’s Prayer could help.

The three texts explain to people how “there is meaning and significance outside yourself, that belonging to a community larger than your own existence matters, that ethical living counts and that it has significance not only for your own family and community, but for the entire world. And that’s huge,” he said.

Other theologians and church leaders at the symposium discussed ways to help their faithful to understand how much unites divided Christians.

But they also recognized that in many cases the faithful want theologians and church leaders to resolve enough of the remaining differences so that they can receive the Eucharist at each others’ liturgies.

Cardinal Kasper said the dialogues have identified a strong shared faith in Jesus Christ and the Trinity, in the content of the creed and about baptism. But, he said, in order for Christians to reach full unity and be able to share the Eucharist, they must resolve differences over the meaning of ordination and who can be ordained, authority in the church, and the authentic interpretation of Scripture.

“What might it take for us to say to one another that, since we so clearly agree on the inner substance of the faith, we should be able to agree to differ within a single family, to work from within a single framework – a framework characterized by full table fellowship – on the issues that remain?” he asked in his formal presentation to the group.

In an interview afterward, Bishop Wright said some differences are not so central to Christian identity that they would prevent different Christian communities from recognizing each other and even sharing the Eucharist.

“If we agree on what the Eucharist is, does it matter that when I celebrate it, I am not an ordained man in the Roman tradition? Does that actually matter? At the moment, it does. But should it?” he asked.

Bishop Wright said that from an Anglican and scriptural point of view, “the qualification for sharing table fellowship is sharing faith in Jesus as messiah and lord, as the crucified and risen one.”

The Rev. Geoffrey Wainwright, Methodist co-chairman of the Catholic-Methodist dialogue, said that one of the most positive ecumenical signs coming from parishes and local congregations is the “great pressure to be able to share the Eucharist together.”

“I think it is quite right that we cannot do that immediately. I think there does have to be sufficient agreement about what is going on when we gather around the table of the altar,” he said. “But there will be increasing pressure from the people saying, ‘Now, look, you bishops and you theologians, get your act together so that we can genuinely – and without faking it – come together into communion.’“