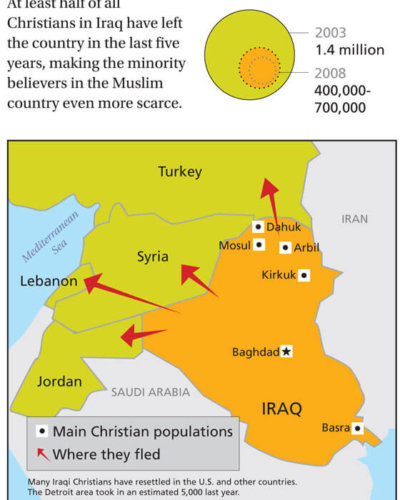 VATICAN CITY – The need to find ways to stop the slow, yet steady departure of Christians from the Middle East has come into greater focus recently.

Pope Benedict XVI urged the dwindling Arab Christian minority to patiently persist in its struggle to survive and hold onto its religious and cultural identity when he met with bishops from Iraq, Iran and Turkey who were in Rome to report on their dioceses early this year.

And he will have many public occasions to reach out and appeal directly to Christians with his proposed visit to the Holy Land May 8-15.

The Christian exodus has become so severe that Iraqi bishops called on the pope to convene a regional synod to address the problem.

In the meantime, conferences were held in Detroit, Lebanon and Rome in February to underline the important role Christians play in Muslim-majority nations.

The Rome gathering organized by the Sant’Egidio Community brought together Christian and Muslim scholars and religious leaders from the Middle East to discuss the value and contribution of the Eastern Christian churches in Arab nations.

One element that emerged from the meeting is that Christians don’t belong in the Middle East simply because they’ve been there since the time of Jesus and are legitimate citizens of Arab nations. Many said they must stay because they possess a unique culture and mindset that help contribute to the building of a more peaceful, democratic nation.

Some said a strong Christian presence could help moderate Muslims counter the rising wave of Islamic extremism sweeping across the region.

Mohammed Sammak, political adviser to Lebanon’s grand mufti and a conference participant, said, “The fewer Christians there are, the more (Islamic) fundamentalism rises,” fills the void and gains the upper hand; “that is why as a Muslim, I am opposed” to Christians emigrating.

For Christians to disappear from the Middle East would be like “pulling out the threads of a cloth” so that the whole social fabric risks unraveling and dying, he said.

It’s a mistake to help Christians leave their respective nations through easier visa procedures and other measures, said Mr. Sammak.

When authorities help ease Christian emigration, he said, they are unwittingly aiding in the elimination of Christians from the Middle East by taking part in “a conspiracy of good faith.”

Another danger, he said, is that if Muslim-majority nations do nothing to protect and encourage their Christian minorities to stay, then North American and European countries will think that Islam does not accept or respect Christianity.

If people living abroad see Muslims are unable to live with Christians even when they share the same culture, language and citizenship, he said, “then they’ll think, ‘so how can we Europeans live with Muslims.’”

Tensions and restrictions against Muslims living in or emigrating to Europe will increase as tensions and violence against Christians continue in the Middle East and vice versa, said Mr. Sammak.

Christians possess a unique culture that displays “the willingness to mediate” and, therefore, they “could do so many things because reconstruction (of a war-torn nation) deals above all with souls, culture, mentalities,” he told Vatican Radio Feb. 23.

Many participants agreed that large numbers of Christians have been fleeing the Middle East for economic and political motives rather than purely religious reasons.

Participant Bernard Sabella, a Catholic member of the Palestinian parliament and former sociology professor at Catholic-run Bethlehem University in the West Bank, said the exodus of Christians “is related to the global market. So if a young Palestinian – Christian or Muslim – can get work in the United States or Dubai, then they will go.”

Tarek Mitri, Lebanon’s minister of information, said Christians “were victims of their good education” and marketable skills in that they were more likely to be able to choose and provide a better life for themselves and their families by emigrating to where there were more opportunities.

A significant mass exodus began in the 20th century, he said, and those losses were already glaringly apparent in 1964 when Pope Paul VI made the first visit by a pope to the Holy Land since St. Peter.

Mr. Mitri said the cultural and economic contribution of Christians have always outweighed their numerical proportion.

Mr. Sammak said losing Christians would mean losing the human, cultural, scientific and educational resources they bring to a nation.

Archbishop Sleiman told reporters that while economic and political problems are major reasons for leaving, Christians in countries like Iraq and the Palestinian territories leave out of “fear of Islamic fundamentalism and being legally discriminated against” in an Islamic republic or under Shariah, the religiously based law of Islam.

He said the international community must help Iraq build peace and democracy by guaranteeing “the primacy of law and primacy of nation.”

“Many problems will be solved because (a state of) law equals equality and justice,” he said.

The Lebanese-born archbishop of Baghdad said he believes it is still possible for the dwindling numbers of Christians to play a role in the rebuilding of their country.

Syrian Orthodox Metropolitan Mar Gregorios Yohanna Ibrahim of Aleppo appealed to Muslim nations and authorities, telling them that their role is “to safeguard Christians. It is up to you. We don’t believe our protection can come from outside.”