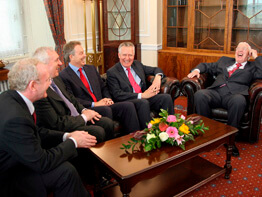 DUBLIN, Ireland – Christian leaders in Northern Ireland have encouraged citizens to pray for the success of the region’s fledgling Catholic-Protestant power-sharing government.

Archbishop Sean Brady of Armagh issued a statement with the heads of the Anglican, Presbyterian and Methodist churches, calling May 8 a “historic day” when enemies joined together to form the power-sharing government. The new government returns home rule to Northern Ireland after a five-year suspension.

“We recognize that much work still remains if all people in Northern Ireland are to share the future together,” they said. “We are especially aware of those for whom the pain of the past is a constant living reality.”

The religious leaders, who have been instrumental in persuading members of the paramilitaries to decommission their weapons, said they wanted to “invite Christian people to give thanks to God for all that has been accomplished and to pray that guidance and courage might be given to those who lead our community in the days ahead.”

“On this historic day, we express appreciation to all politicians who have taken courageous steps toward creating a society of stability and peace,” they said.

To underscore the importance of the power-sharing agreement in Northern Ireland, Pope Benedict XVI invited the Irish and British ambassadors to the Vatican to meet him briefly May 9 before he left for Brazil, the embassies said.

The former hard-line leader of the Protestant community, the Rev. Ian Paisley, agreed to become Northern Ireland’s first minister and to share power with his nationalist counterpart, Martin McGuinness, a former commander of the paramilitary group the Irish Republican Army.
Rev. Paisley had vowed not to share power with Catholics. However, after the predominantly Catholic nationalist parties gave assurances that they would support the Northern Ireland police force and the judiciary, Rev. Paisley softened his line.

Under the new government, Northern Ireland’s Cabinet-level ministers take over direct responsibility from officials in Great Britain. All decisions are made on a cross-community basis, with a majority of both Catholic and Protestant officials required to make a decision binding.

Following the 1998 Good Friday Agreement, all parties to the conflict pledged to work to achieve their political ends by purely peaceful means. The international accord, sponsored by the Irish and British governments, also committed all parties in the conflict to sign up to the so-called “principle of consent,” in which a majority of the people of Northern Ireland would have to decide on any future constitutional change in the region’s status.

When the power-sharing agreement established under the accord broke down in 2002, it was the fourth such collapse.