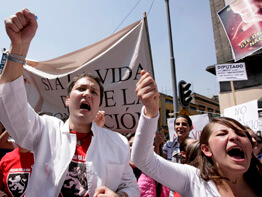 MEXICO CITY – With protests, a pilgrimage and emphatic declarations, the Catholic Church has intensified its efforts to derail legislative proposals which would decriminalize abortion in Mexico.

The issue also reignited tension between the church and Mexico’s left, and led to renewed questions over whether clergy and Catholic groups can participate in political activism in a nation where religion and state are divided by law.

Events culminated March 25, when nearly 10,000 people took part in the Pilgrimage for Life in Mexico City to protest bills in the national Congress and the capital assembly which would allow abortions during the first three months of pregnancy.

Garbed in white and bearing slogans such as “We Defend Life” and “Thou Shall Not Kill,” participants sang hymns and prayed the rosary. Some vowed to continue mobilizing until the bill was defeated despite the long odds.

“Unfortunately we have a problem here in the capital – the majority of the local congress belongs to the Democratic Revolution Party,” said Francisco Rivera, a Mexico City resident, referring to the left-leaning party which has supported the abortion legislation.

“We think the party is in favor of death, and we will do anything we can – from prayers to peaceful protests – to try and stop them,” he said.

After several hours of walking through traffic and the smoggy midday sun, the protesters arrived at the plaza in front of the Basilica of Our Lady of Guadalupe, where Mexico City Cardinal Norberto Rivera Carrera said an open-air Mass.

“Why do (lawmakers) try to ensure the right to education and the right to health care when they are denying the right to live?” Cardinal Rivera asked during his homily. The response was applause and chants of, “life yes, abortion no!”
He added, “The right to live is the basis of all other human rights.”

The event was the latest in a series of protests and declarations against changes to the nation’s abortion laws, which allow the practice only in instances of rape or when the pregnancy endangers the mother’s life. The laws vary from state to state, with Mexico City’s being the least restrictive.
Supporters of decriminalization say abortions are widespread despite the laws. Members of the Democratic Revolution Party, known by the acronym PRD, say hundreds of women die every year due to botched, illegal operations, often performed in hazardous conditions.

According to the United Nations, hundreds of thousands of illegal abortions are performed every year in Mexico.

The Mexico City abortion bill is likely to be approved in April, while prospects for decriminalization on the federal level are less probable.
No party holds a majority in either house of Congress, but the conservative National Action Party of President Felipe Calderon, which opposes abortion, has a plurality in both. Mr. Calderon has publicly said he is “in favor of life” and called on lawmakers to focus their energy on less-divisive subjects.

The issue has reawakened long-standing tensions that pit conservatives and the church against Mexico’s left, with increasingly harsh words from both sides.

An editorial published March 25 by the Mexico City Archdiocese accused the PRD of having an “arrogant attitude” and being “authoritarian and fascist.”

It followed statements from Mexico City Mayor Marcelo Ebrard, a PRD member, that he will “not permit threats or intimidation against legislators that are analyzing the decriminalization of abortion.”

The Mexican Constitution, drafted in 1917, says clergy are barred from participating in politics, a provision stemming from the Catholic Church’s great power during Mexico’s colonial era and early independence. The prohibition has not been enforced in recent years, but PRD lawmakers have called on the church to stay out of the debate.

Catholic leaders have scoffed at the demands.

Catholic-affiliated organizations have said they are participating strictly as concerned citizens.

One group following this strategy is the Mexican College of Catholic Lawyers, which has banded together with other civic organizations to form the coalition “We Are Life.” The alliance led hundreds in protest outside the Mexico City Legislative Assembly March 22.

Armando Martinez, head of the Catholic lawyers, said that instead of decriminalizing abortion, lawmakers should help poor mothers and give tax breaks to larger families. He also pledged to challenge any decriminalization of abortion before Mexico’s Supreme Court.

Following the protest, the Vatican’s top anti-abortion representative and president of the Pontifical Council for the Family, Colombian Cardinal Alfonso Lopez Trujillo, arrived in Mexico City to inaugurate an international conference against abortion.

While local media reported that Cardinal Lopez Trujillo was sent by the Vatican to participate in anti-abortion efforts, Bishop Aguiar said the visit was already planned prior to the proposals’ introduction on the local and national levels.