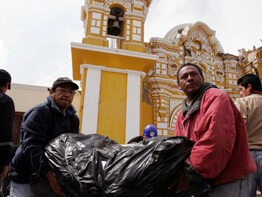 LIMA, Peru – When it comes to dealing with disasters like the powerful earthquake that struck Peru’s southern coast Aug. 15, the Catholic Church has an advantage – the pastors know the people.
In responding to an emergency, “you build on your strengths,” said Aaron Skrocki, South American emergency program manager for Catholic Relief Services, the U.S. bishops’ overseas humanitarian and development agency. “Having a local (parish) community in place that knows the people better than any local government official does makes it much easier to get a response effort up and running.”
Skrocki arrived in Peru the night after the earthquake and traveled Aug. 17 to Chincha, Pisco and Ica, the three cities nearest the epicenter.
The scene was chaotic immediately after the earthquake, which killed more than 500 people, injured more than 1,000 and left at least 35,000 families homeless. Although more than 200 flights, carrying more than 600 tons of supplies, had arrived at the air force base in Pisco, distribution was slow.
“There was a lack of coordination,” said Luis Cordoba, emergency coordinator for CRS in Peru. “No one knew what assistance had arrived, what had been distributed and what else was needed.”
Two days after the quake, people were “waiting all day in line for one one-liter bottle of water,” Skrocki said. “The longer this goes on, the more desperate people become.”
Part of the problem with distribution was logistical: Electricity was cut off, water could not be pumped and roads and bridges were damaged. But part of the problem, Skrocki said, seemed to be fed by political infighting over whether the central government or local and regional governments should oversee relief efforts.
“Unfortunately, it’s a similar story (in) many other countries,” said Skrocki, who has been involved in CRS disaster responses to Hurricane Stan in Guatemala in 2005, the eruption of the Tungurahua volcano in Ecuador in 2006, and flooding earlier this year in Bolivia.
By Aug. 21, the situation had improved in Ica. Bishop Guido Brena Lopez of Ica told Catholic News Service by telephone that electricity had been restored and some shops and markets were open again.
In Pisco, however, where more than 80 percent of the houses were destroyed, there was still no electricity. The bishop said relief efforts were concentrated in the center of the city, making it difficult for people in more remote areas to get assistance.
Bishop Brena noted that in Pisco and Ica people are still very nervous because there have been a lot of strong aftershocks.
“More aid is arriving through the church, and we are channeling it as rapidly as possible so that it reaches the outlying areas,” he said.
Meanwhile, people are organizing themselves.
“One characteristic in Peru is that relatives and neighbors help one another,” the bishop said. Many people, especially those with small children, are trekking north to take refuge with relatives in Lima, while southbound buses have carried a steady stream of people from Lima carrying food, blankets and other supplies to family members in the affected cities.
On Aug. 18, government emergency agencies and international organizations such as CRS, the Red Cross and Red Crescent, Oxfam and others set up a command center at the air force base in Pisco to exchange information and coordinate efforts.
“If a lot of agencies are involved and we don’t organize well, it will only create more chaos,” Cordoba said.
Security was the first obstacle. Shortly after the earthquake, looters struck, sometimes foraging for necessities and sometimes raiding the rubble of people’s homes for anything of value. Although tents and shelters have been set up in all three towns, many people have camped out in front of the ruins of their houses to protect anything that might be left.
“I saw people sleeping on the street,” Skrocki said. “They took the couch out of their house, put up a couple of chairs and put a sheet over the top, and that’s where they’re living.”
That worried Dr. Manuel Pena, director of the Pan American Health Organization office in Lima. In an interview with the Channel N cable TV station, Pena warned that if people stayed near their homes the lack of water and toilets could lead to the spread of disease.
On Aug. 20, the Health Ministry dispatched health brigades to the cities to set up portable toilets, assist with hygiene and provide vaccinations against illnesses such as hepatitis.
The full extent of the earthquake’s effects remained unclear. The CRS emergency team visited several rural communities where the facades of adobe houses showed only cracks, but back rooms had collapsed. Cordoba worried that if inspectors make only a quick visual check of those communities, they will underestimate the damage.
CRS will work with Caritas Peru to provide essentials such as food, water, shelter and medicine. Meanwhile, the agencies will be planning for the long-range, painstaking task of helping people rebuild their homes and their lives.
Caritas Peru is the local affiliate of Caritas Internationalis, the international confederation of Catholic aid agencies. CRS is part of the Caritas network.