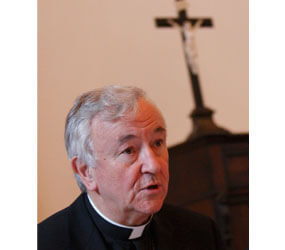 VATICAN CITY – Catholic teaching and the truths of the Gospel have a right to be heard in public debate, especially in a country where so many people claim to be Christian, Pope Benedict XVI told the bishops of England and Wales.

However, the church must recognize dissent within its own ranks and not accept it as being part of a balanced discussion, he said Feb. 1 in an address to bishops who were making their “ad limina” visits.

The meeting with the bishops, who were at the Vatican to report on the status of their dioceses, took place as Pope Benedict prepares to visit Great Britain in September.

Referring to the Equality Bill under debate in Britain’s Parliament, the pope said some legislation designed to guarantee equal opportunity for all people actually would impose “unjust limitations on the freedom of religious communities to act in accordance with their beliefs.”

Catholic bishops have said the bill means churches could be sued by anyone who was turned away as a candidate for the priesthood on grounds of gender or sexual lifestyle.

A recent vote in Britain’s House of Lords, however, supported an amendment that protected the existing rights of churches to insist that clergy and high-profile lay employees live in a manner consistent with Christian moral teaching.

Pope Benedict urged the bishops to continue defending church teaching in the public realm, adding that they have a right “to participate in national debate through respectful dialogue with other elements in society.”

By being vocal participants in public discussion, the bishops are maintaining Britain’s long-standing tradition of freedom of expression and are giving voice to the similar beliefs held by many people who are unable to express them, he said.

“When so many of the population claim to be Christian, how could anyone dispute the Gospel’s right to be heard?” the pope asked.

“Fidelity to the Gospel in no way restricts the freedom of others – on the contrary, it serves their freedom by offering them the truth,” he said.

To bring a coherent, convincing message to the people, the church must ensure the Catholic community speaks with one voice, he added.

In a culture that encourages the expression of a wide variety of opinions, the pope said, “it is important to recognize dissent for what it is, and not to mistake it for a mature contribution to a balanced and wide-ranging debate.”

The bishops must prepare the laity to convey church teaching accurately and comprehensively, he said.

Pope Benedict also asked the bishops “to be generous in implementing the provisions” of his recent apostolic constitution, which established a special structure for Anglicans who want to be in full communion with the Roman Catholic Church while preserving aspects of their Anglican spiritual and liturgical heritage.

He asked the bishops to assist such groups in their desire for full communion, saying that if they were warmly and openly welcomed, they “would be a blessing for the entire church.”

The pope also said his upcoming visit to Great Britain would be an opportunity to witness firsthand the “many signs of living faith and devotion” among Catholics and to help them strengthen and confirm their faith.

Archbishop Vincent Nichols of Westminster, president of the Catholic Bishops’ Conference of England and Wales, told the pope that his visit would offer encouragement not only to Catholics, “but to all our fellow citizens.”

“We are confident that your presence and teaching, with its consistent and reasoned appeal to all people, will be warmly received,” he said.

The archbishop also said the beatification of Cardinal John Henry Newman “is, we trust, the eagerly anticipated climax of your proposed visit.”

The Vatican has not officially announced the dates or cities the pope will visit in Great Britain in September, but the pope is expected to preside over the beatification of the influential 19th-century theologian and former Anglican.

In his address to the British bishops, the pope said Cardinal Newman was an outstanding example of someone who was faithful to truth even at high personal cost.

“Great writers and communicators of his stature and integrity are needed in the church today, and it is my hope that devotion to him will inspire many to follow in his footsteps,” the pope said.

In an interview with the Vatican newspaper, L’Osservatore Romano, Jan. 31, Archbishop Nichols said the pope’s “brief, but effective” trip to Britain would concentrate on the role of faith in a secular, democratic society.

He said the British government and Queen Elizabeth II, the supreme governor of the Anglican Church of England, were “extremely in favor of this visit” and that church leaders were working closely with government ministers and officials to flesh out the details of the papal itinerary.

During a press conference with journalists after the papal audience, Archbishop Nichols said the pope confirmed he was going to Scotland as part of the trip.

The archbishop said the pope will also be meeting with Anglican Archbishop Rowan Williams of Canterbury, England, and that the meeting would play “a prominent part of the (papal) visit.”

However, he said, it was not yet decided if the meeting would take place in Canterbury or elsewhere.

Concerning the apostolic constitution, the archbishop told the Vatican newspaper that it was still not clear how many Anglican communities around the world were going to take advantage of the new provision.

But, he said some members of the Church of England planned to make their response to the Vatican provision public on Feb. 22, the feast of the Chair of St. Peter, which symbolizes the authority and unique ministry of the pope.