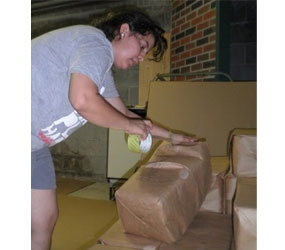 A five-month outreach project of Our Lady of Pompei Parish in Highlandtown and its Hispanic youth group netted more than 36,000 pounds of food, which is en route to Peru and the Don Bosco missions in the Andes.

According to Father Luigi Cremis, associate pastor, and Nick Bruce, a leader of the Hispanic youth group “Pies Descalzos” – barefeet in Spanish – this is the second parish outreach to Peru, the first coming in 2008 after an earthquake hit the nation, which is on the Pacific coast of South America.

The most recent effort received a boost in May with a visit from Salesian Father Hugo De Censi, whom Pompei leaders describe as the “founder and spiritual guide of the Don Bosco missions.”

The container of food left the Port of Baltimore earlier this month. In Peru, it will be distributed in 60 Don Bosco missions in poor, otherwise abandoned areas of the Andes.

Trained as an X-ray technician, Sister Isabelle served in Venezuela, Jordan and Ghana, before becoming a registered nurse in 1979. She ran a village clinic in Ghana for more than two decades, then worked in New Mexico and Mexico. Now residing in Florida, she teaches low-income women how to find employment and feed their families.

Meyers, a rising junior at Notre Dame Preparatory School in Towson and member of Loyola Blakefield Aquatics, won the 200-, 400- and 800-meter freestyle titles at the World Deaf Swimming Championships in Choimbra, Portugal, the latter two in meet record times. Meyers earned a fourth gold medal in the 800 relay, in which the United States set a deaf world record.

Pelton, a parishioner of the Cathedral of Mary Our Queen in Homeland and member of the North Baltimore Aquatic Club, earned a gold medal in the 400 medley relay at the FINA World Championships in Shanghai.

Tim Watkins was honored with the Zumarraga Evangelization Award in Guadalupe, Spain Aug. 14. The honor recognizes Watkins’ work on the documentary “The Blood & The Rose,” which explores the apparitions of the Virgin of Guadalupe.

A parishioner of St. John, Westminster, Watkins is president of Hunt Valley-based Renegade Communications. According to a news release from Renegade, Watkins directed the film on location, in Spain and Mexico City. The film is scheduled to be released later this year.

He was unanimously elected by the MICUA Board of Trustees, which includes the presidents of 16 private colleges and universities in Maryland. Thomas Powell, president of Mount St. Mary’s University in Emmitsburg, was elected vice president.

“Secretariat,” a feature film about the Triple Crown winning thoroughbred making the rounds on some premium cable channels, includes a speaking part for Dick Jerardi, a graduate of Loyola Blakefield and longtime sports reporter for The Daily News in Philadelphia.

In the film, Jerardi is the scribe asking the first question at a press conference before 1973 Belmont Stakes.