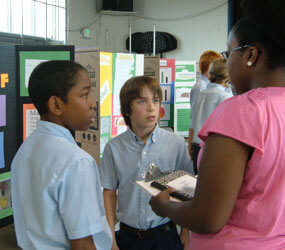 Immaculate Heart of Mary School in Baynesville held its first science fair, in the interest of expanding its science and technology program. Students from the upper grades were judged May 26 by four professionals.

In the eighth grade, first place went to Gerriza Blames, Rebecca Candler and Quinn Goodspeed, for their entry titled “Home Sweet Biome”; second went to the team of team of Kelly Gilliam and Ashley Griffin, and third went to Kelsey Fitzpatrick and Erin Cullinan.

Searles-Adenegan and Williams are parents of Immaculate Heart of Mary students. D’Adamo is a graduate of the school, and former science teacher there.

Christopher Sheridan, a rising senior at Boston College and parishioner of the Cathedral of Mary Our Queen in Homeland, has been awarded a Barry M. Goldwater Scholarship, described in a news release as “one of the premier undergraduate fellowships in the sciences.”

Sheridan, a double major in biochemistry and philosophy, is enrolled in BC’s College of Arts and Sciences Honors Program and its Presidential Scholars Program. He has also served as an editor of Elements, Boston College’s undergraduate research journal.

A news release said that “Sheridan’s specific interest lies in studying the human brain, from both a scientific and humanistic standpoint.” He spent the summer of 2010 completing a German-language immersion program at Munich’s Goethe Institute.

A graduate of the Gilman School, Sheridan is the son of Dr. Michael J. and Talia R. Sheridan.

Robert J. Jirsa is only the fifth alumnus of Archbishop Curley High School to receive its Archbishop Michael J. Curley Medal, which recognizes a graduate for leadership and commitment to the school.

Jirsa, of the Class of 1973, has served on Curley’s Board of Trustees and numerous committees and campaigns. He also established an endowed scholarship to Curley, awarded annually to a student in need.

“His involvement with Curley has been a real blessing,” said Conventual Franciscan Father Joseph Benicewicz, Curley’s president. “I don’t know if there’s ever been a time when he has said he was unable to help us out.”

Jirsa serves on the Board of Trustees of The Cathedral Foundation, which publishes The Catholic Review, and has served on the Board of Financial Administration for the Archdiocese of Baltimore. He is a parishioner of St. Francis de Sales, Abingdon.

Jacob P. Fraley, a Baltimore County resident, was introduced as valedictorian by Andy Parsley, principal. All members of the Class of 2011 have in-place jobs, job placements through agencies, or further educational or vocational training opportunities.

A special collection in the Archdiocese of Baltimore for Japan’s tsunami relief brought in more than $238,000. The March 11 tsunami devastated the nation’s northern regions after a magnitude 9 earthquake.