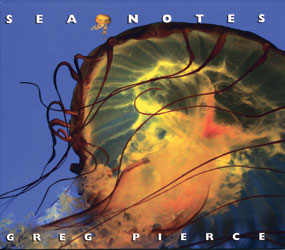 Greg Pierce, a parishioner of the Catholic Community of St. Francis Xavier in Hunt Valley, produced “Sea Notes,” a music CD that features songs written specifically for the National Aquarium in Baltimore’s exhibit “Jellies Invasion: Oceans Out of Balance.”

A portion of the proceeds from the sale of the CD will be donated to the Guardian Angel Society at the aquarium, which provides free admission to underserved youth, wounded members of the military, and the sick and terminally-ill in the Baltimore community.

“Producing ‘Sea Notes’ is a way for me to give back to the community,” said Pierce, an award-winning producer and composer. “I’ve been inspired by water and sea life since I was a child, and being able to share that love through music while also benefitting the National Aquarium is an honor.”

The CD and an accompanying poster may be purchased at the National Aquarium, Greetings and Readings in Hunt Valley, and on online sites such as iTunes, Amazon.com and CDBaby. It may also be ordered at SeaNotesMusic.com.

The community at The John Carroll School in Bel Air set new records in its 2011 Annual Thanksgiving food collection drive, winning a challenge from Seton-LaSalle High School in the Diocese of Pittsburgh to see which could bring in the most food items.

The principal and campus minister at the school which collected the smaller amount of food would have to wear the other’s NFL team – that of the Baltimore Ravens or Pittsburgh Steelers – for a school day.

The donations will be passed on to Manna House, a soup kitchen housed at the Bel Air United Methodist Church, and to the food pantry at St. Francis de Sales Parish in nearby Abingdon.

The annual Thanksgiving Food Drive at Calvert Hall College High School in Towson brought in more than 13,000 pounds of food, which was donated to agencies such as Beans and Bread, Our Daily Bread, the Women’s Housing Coalition, My Sister’s Place and Christopher Place Employment Academy.

A closing Mass was celebrated Nov. 22 by Father Gerard Francik to bring an end to the drive. The school community collected cans and other non-perishable items under the theme “A Place at the Table.”

Four transportable storage units, donated by ABF U-Pack Moving, were placed in the school’s plaza, and students filled the units each day this week.

Vincentian Father Sylvester Peterka honored a pair of West Baltimore centenarians known for their efforts on behalf of Ladies of Charity, a Baltimore church outreach.

According to Ann Taylor, Father Peterka celebrated an Oct. 4 funeral Mass for Louise Turks, a parishioner of St. Cecilia, who had been born July 31, 1911. Earlier, Father Peterka presided at a Mass and reception for Mary Tates on the occasion of her 100th birthday. A parishioner of Immaculate Conception, Baltimore, Tates was born Aug. 9, 1911.

Monsignor Joseph S. Lizor, Father William F. Franken and Father George J. Gannon, pastors of St. Luke in Edgemere, Our Lady of Hope in Dundalk and Sacred Heart of Mary Dundalk, respectively, joined the sixth-graders of Our Lady of Hope/St. Luke School for an retreat at St. Luke Oct. 30.

Monsignor Lizor led a tour of the church and explained items used in the liturgy, Father Franken talked about the Mass and the new missal, and Father Gannon spoke to students about prayer. The day included service, as students prepared snack bags for the soup kitchen at St. Rita in Dundalk.