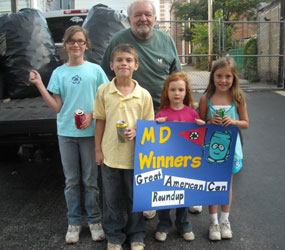 The rate of recycling aluminum cans for St. Thomas Aquinas was 8.3 pounds per student, the highest rate in the state and sixth among 108 schools nationwide. School Sister of Notre Dame Patricia Hogan, an education assistant at the school, led its aluminum can recycling program, which was supported by the school, parish and community members.

The school plans to use the $1,000 award, which it received in a June 9 ceremony, for technology in pre-K and kindergarten programs. The Can Manufacturers Institute sponsored the contest, which ran from November 2010 to April.

Baltimore native Father Charles T. Huegelmeyer will celebrate the 60th anniversary of his ordination as a Maryknoll missioner June 26 at the order’s headquarters in Ossining, N.Y.

Father Huegelmeyer attended the parish school at St. Mary’s in Baltimore and St. Charles College in Catonsville. Ordained on June 9, 1951, he earned doctorates in Latin, Greek and the classics from The Catholic University of America, and taught classical languages at Maryknoll College in Glen Ellyn, Ill.

Beginning in 1962, Father Huegelmeyer received his first overseas assignment, in Guatemala, and later served in El Salvador, where he baptized thousands in more than 90 villages, and Honduras.

Third Order Regular Franciscan Father Benedict Jurchak, a product of Our Lady of Mount Carmel Parish in Thurmont, was ordained at St. Francis University in Loretto, Pa., May 29 by Bishop Joseph V. Adamec, bishop emeritus of the Diocese of Altoona-Johnstown.

Father Jurchak, the son of John and Penny Jurchak, attended Catoctin High School and earned his bachelor’s and master’s degrees from The Catholic University of America.

The awards honor local, regional and national TV commercials and programs. The Henderson Creative team won for a motivational campaign for Constellation Energy.

“We live and breathe the creative production of every single job we produce,” Evelyn said. “As a small firm, it is really cool to let our work speak for itself. We are extremely honored to win these awards.”

A pair of soccer standouts from Mount St. Joseph High School will continue their playing careers at the NCAA Division I level. Jalen Robinson, a rising senior and member of several national teams, will play for Wake Forest University in the Atlantic Coast Conference, starting in 2012. Jordan Manley, a recent graduate, will play for American University in the Patriot League.

They led Mount St. Joseph to the Maryland Interscholastic Athletic Association A Conference title in 2009, and the MIAA semifinals in 2010.

The Archdiocesan Office of Deacon Formation is in its final stages of interviewing potential candidates who anticipate being ordained in spring 2015. All inquiries must be made by June 30. Please contact Father Patrick Carrion at pcarrion@archbalt.org or 410-752-8498, ext. 1114.