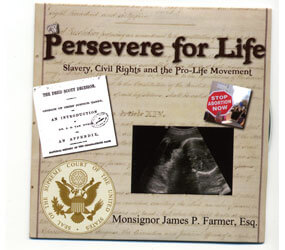 The Respect Life ministry at St. John in Westminster is leading a campaign to open a crisis pregnancy center in Carroll County, and its pastor is doing his part to help the effort.

A CD recording of a speech Monsignor James P. Farmer gave at the Archdiocese of Baltimore Respect Life Conference in March 2006, titled “Persevere for Life: Slavery, Civil Rights and the Pro-life Movement,” is available for $3, with all proceeds going toward the pregnancy center.

Together with Tender Care Pregnancy Center in Hanover, Pa., the parish’s Respect Life ministry has begun training volunteers for the planned pregnancy center. Carroll County residents make up about half of the clients at the nearest pregnancy center, located in Baltimore County.

Collin Wojciechowski, a parishioner of Our Lady of the Chesapeake in Lake Shore and a rising junior at the University of Maryland Baltimore County, has been appointed as the 2011-12 student regent for the University System of Maryland.

A major in political science and media and communication studies, Wojciechowski had previously served as the student member of the Anne Arundel County Public Schools Board of Education.

“The very first time we chatted,” Father Brian M. Rafferty, pastor of Our Lady of the Chesapeake, wrote in an e-mail, “Collin and I found ourselves examining the desired balance between people concerns and Gospel values. I was delightfully stunned, that such a cool and ‘with it’ young man was not only quite savvy about such concerns, but also so passionately interested in addressing them.”

The Center for Pregnancy Concerns recently received a check for more than $4,000 from Knights of Columbus John Paul the Great Council 13859, which is based at Our Lady Queen of Peace in Middle River.

The pregnancy center distributes plastic baby bottles to churches, schools and community organizations, which use them to collect donations of change. Grand Knight Tim McCubbin and his council responded in late spring by rallying the parish to donate an impressive sum.

The Maryland State Board of the Ladies Ancient Order of Hibernians, Inc., a national fraternal and charitable group of Catholic women of Irish descent, funds an annual Educational Assistance Program.

Madeline Blakely, of Rising Sun in Cecil County, was chosen as the group’s 2011 scholarship recipient. She will use $1,000 from LAOH at Stevenson University, where she will pursue a nursing degree.

U.S. Army Specialist Gregory Shepherd, a parishioner of St. John the Evangelist in Columbia, was among eight members of the U.S. All-Army Taekwondo team that participated in the CISM 5th Military World Games in Rio De Janeiro, Brazil, July 16-24.

More than 100 nations were represented at the event. A 2005 graduate of Wilde Lake High School, Shepherd attends the University of Maryland.