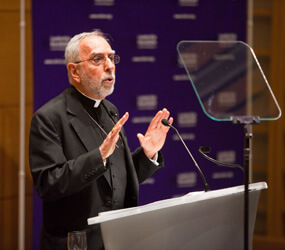 PHILADELPHIA – The church’s great communications challenge today is to “keep the interest of people who have so many places to turn,” Bishop Gerald F. Kicanas of Tucson, Ariz., told the National Leadership Roundtable on Church Management.

The church should not hesitate “to engage the modern digital technologies,” which “can be vehicles for communicating,” he said. Given recent advances in communications technology, he noted that people today Twitter and blog, they e-mail, use Skype, Blackberries and iPhones, and choose Facebook partners.

Still, “communication, while enhanced by technology, rests on the power of the message and the authenticity of the communicator,” Bishop Kicanas said. “Technology facilitates the fundamental desire” people have to communicate and engage one another.

With “effective communications” as its theme, the June 24-26 meeting of the National Leadership Roundtable on Church Management examined the potential of a new universe of communications for the church. Participants included Catholic bishops, educators, leaders in business, finance and philanthropy, and priests, sisters and lay leaders.

Bishop Kicanas told the meeting how much he enjoys theater and commented on its relevance for communicators. “Great actors and actresses communicate,” he said. “The language of theater needs to be crisp, punctuated with images and to resonate with feeling.”

Similar qualities are needed in effective church communications, Bishop Kicanas said. “Abstract, theoretical, disembodied language has little place on the stage or for that matter from the pulpit or in most communication by the church,” he added.

He cautioned, though, that “the greatest blow to the integrity of the church’s message and its effectiveness occurs when those who deliver that message are simply playacting.”

Bishop Kicanas described himself as a blogger of sorts. The online “Monday Memo” he writes weekly to the Tucson Diocese is “presented as a kind of blog on our Web site and sent out to an e-mail readership,” he said.

The “Monday Memo” helps him “teach, inform and bring people’s attention to the good things happening in the diocese,” he said, adding that it amazes him “how many people respond.”

But “people today want to be in the know,” he said. “We live in an information society, a mass media culture.”

Bishop Kicanas accented the importance of trust for effective communications. The church’s sexual abuse crisis “harmed far too many, but also damaged the church’s ability to communicate,” he said. Some judged the church hypocritical, “more concerned about its reputation than about children who were harmed. Some stopped listening.”

Thus, restoring trust became his goal in Tucson, “as it has for so many bishops in their dioceses,” he said.

And as the diocese emerged in 2005 from the bankruptcy protection it sought in 2004, Bishop Kicanas said he was “deeply moved … to hear (abuse) victims say to the media that they had been treated fairly and respectfully.” The church “embodied her message. They sensed the church cared,” he said.

At the time of the bankruptcy, Bishop Kicanas said the step was taken in the belief that it represented “the best opportunity for healing and for the just and fair compensation of those who suffered sexual abuse by workers for the church in our diocese.”

Another lesson learned from the bankruptcy was that “openness and transparency” are critical, Bishop Kicanas said in Philadelphia. He recalled struggling “mightily whether to put out information that was embarrassing, disturbing and potentially harmful for the church.”

But “there are no secrets in our cell-phone, Internet world,” Bishop Kicanas said. “It was best and right to get out the story as it was. That alone could heal. Tell the truth.”