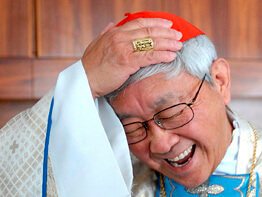 VATICAN CITY – While local government officials in some parts of China arrest Catholics, authorities in other areas of the country are tolerating, or even encouraging, Catholic charitable activity.

A growing number of Catholic dioceses on the mainland have established a Caritas organization and are expanding their social service work.

Representatives of four Chinese diocesan Caritas organizations were at the Vatican March 6-7 for a discussion about how official church-sponsored charities around the world could support their efforts and assist the Chinese poor in general.

Duncan MacLaren, secretary-general of Caritas Internationalis, the Catholic charities’ umbrella organization, said that even though church-state tensions remain, “we cannot ignore the needs of one-fifth of humanity.”

And while China’s communist government continues to use its rejection of “foreign interference” as the reason it refuses to allow the Vatican to choose the country’s bishops, the government does not reject aid money and projects from foreign Catholic charities, he said.

Caritas Macau, Caritas Hong Kong and Caritas Taiwan are all active in the country, as are the Maryknoll China Service Project, the French Catholic Committee Against Hunger and for Development and Catholic Relief Services, the U.S. bishops’ overseas development and relief agency.

Cardinal Joseph Zen Ze-kiun of Hong Kong, who participated in the meeting, told Catholic News Service that the Caritas agencies are found in dioceses “where the bishop is really in charge, which gives a guarantee that it functions like a Caritas should.”

Unlike on the national level where the government-controlled Chinese Catholic Patriotic Association directs church activity, “at the diocesan level, the patriotic association does not always impose itself on the bishop. If a bishop is strong and capable enough, he can control the Caritas in his diocese,” Cardinal Zen said.

While describing the Caritas work as “modest and limited,” Cardinal Zen said, “Caritas is helping with real needs and there are local authorities who are good and care for their people, so there is cooperation.”

And, he said, government authorities have invited Chinese and foreign Catholic agencies to help the elderly, people with mental illnesses, people living with HIV/AIDS and those suffering from Hansen’s disease, formerly called leprosy.

In China’s rural areas, where there is widespread poverty, local governments have benefited from Catholic agencies’ willingness to dig wells, distribute seeds and train a new generation of farmers in sustainable agriculture.

Cardinal Zen said relations usually are smooth as long as the Caritas organization is “discreet.”

“If you become too big, then they may not allow you to work because they are afraid you are becoming too powerful,” he said.

Proselytism, not power, is the usual reason given for closing a program, he said, citing the example of a now-closed technical training program established by the Salesians.

Cardinal Zen said the Salesians explained that they prepare young people for a trade and do not try to convert them.

But the government found it suspicious that the students were not charged a fee.

The Salesians explained that benefactors fully funded the program, but the government officials were convinced that sooner or later the students would be pressured into becoming Catholic, the cardinal said.

The Catholic Church in China prays and yearns for the day when it will enjoy full religious freedom, he said, but “at this moment, the important thing is to help establish a Caritas in each diocese.”

Chinese Catholics may not have a totally normal faith life, but charity is an essential part of Christian faith, and when Catholics have an opportunity to help others they must do so, he said.

And the needs are great, Cardinal Zen said.

“Economic progress is a reality, but everything is not rosy,” he said. “Along with this economic progress you have so many new problems, including corruption on a big scale, and the gap between the rich and the poor is widening.”

“The elderly, young people, HIV patients, migrants … there are many problems and so many needs. Caritas has much to do,” he said.
<