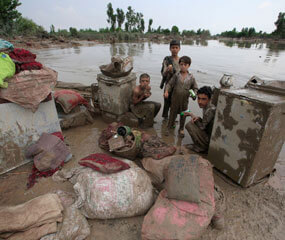 BANGALORE, India – Church aid workers in Pakistan were trying to reach hundreds of thousands of people displaced and rendered homeless by the rain and floods that had claimed more than 1,200 lives in Pakistan’s mountainous northwestern region.

“The biggest challenge before us is how to (get) relief to the needy. Bridges have collapsed and roads have been washed out,” Carolyn Fanelli, CRS acting country representative in Pakistan, told Catholic News Service in a telephone interview Aug. 2.

Eric Dayal, national coordinator for disaster management of Caritas Pakistan, said his agency was faced with the same difficulty.

“Access to the affected people is the biggest problem confronting us now,” he told Catholic News Service. “Most of the roads in the affected (area) are gone and even telephone links are broken. With electric supply also disrupted, communication remains a big headache.”

Fanelli said CRS was in touch with its 40 staff in the field through satellite phones, even though in the most devastated areas they had to vacated their offices. She quoted staffers as saying that the Karakoram Highway passing through Besham is “like a river.”

From Besham, Fanelli said, CRS staff reported they had already cleared land and purchased building material for a school for the victims of the 2005 earthquake that claimed nearly 100,000 lives.

“But, now everything has been washed away,” she said.

Fanelli said the unprecedented rains in the mountainous region have had a crippling impact on the people, who “have no roof and are struggling in the open without food or even drinking water.”

“Our immediate concern is to reach shelter and hygiene kits to these affected people,” she said, noting that the initial aid donation would help 20,000, and more aid would be sent after assessments from field workers.

Dayal said that Caritas Pakistan already moved tent material to be distributed through Multan Diocese and plans to take care of around 2,500 families in emergency response. He warned about the potential for epidemics if people did not get aid, including clean water.

Mehmood Senior, a field engineer for CRS in Besham, reported that staffers walked along muddy roads blocked by landslides and had to cross a temporary bridge made of electrical utility poles to reach some of the villages.

In an effort to get food from the market in Besham, Mehmood said, “People are coming toward Besham from different affected areas after continuously walking through dangerous and irregular hilly areas for 8 to 10 hours.”

Pakistan’s government said Aug. 2 that it has already deployed more than 30,000 troops to rescue marooned people and to deliver aid to them.

With more than a million people already affected by the floods and meteorologists predicting heavy rains in the monsoon season, aid workers fear tougher times ahead.