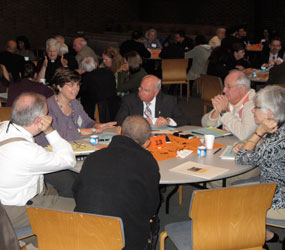 COLUMBIA – Finding that they have common ground, the archdioceses of Baltimore and Washington held their annual Hispanic Ministry Convocation at St. John the Evangelist in Columbia Oct. 17.

In a welcome address, Bishop Mitchell T. Rozanski said it’s important for both dioceses to reflect on the jubilant spirituality that Hispanics bring to the Catholic Church.

“As leaders in those parishes, it is so important that we are not only up with the trends of our times, but ahead of the trends of our times so that we can be the leaders for setting the tone for our people,” he said. “When we have a welcoming tone set for all who come to our parish and are willing to be open to all who come, that tone spreads throughout the community.”

Conventual Franciscan Father Kenneth Davis, who has played major roles in national Hispanic ministry councils, made a presentation on the contributions of Hispanic spirituality to the United States church. One of his recurring themes was that American Catholics can learn from Hispanics.

Maria Johnson, director of the Archdiocese of Baltimore’s Hispanic ministry, said, “Let’s look at the Latino experience. There’s almost no clergy, but a vibrant faith. It sustains people through crisis and nourishes them. How many cultures can learn from them?”

Johnson said: “If we want Catholic schools to survive, we have to tap into the Latino community. We have to be creative.”

Mary Ellen Russell, executive director of the Maryland Catholic Conference, addressed attendees about the November 2012 referendum to overturn the Dream Act. The law would allow illegal immigrants to receive in-state college tuition after attending high school in Maryland for three years, during which they or their parents have paid taxes during those years. The students must first apply to community colleges.

The legislation was passed in the Maryland General Assembly and signed into law earlier this year by Gov. Martin J. O’Malley. It was quickly challenged by a petition that had more than 60,000 signatures. Russell said that people in parish ministry will provide invaluable help during the next 16 months.

“We have a challenge ahead of us,” Russell told attendees. “It wasn’t difficult for this group of opponents to collect sufficient signatures to put the bill on the ballot. “Polling will show that there are unfortunately a number of people in the state who disagree with the issue. The reason they disagree with the issue is, I believe, they don’t understand the facts about the bill. That’s the real challenge we have ahead of us – that’s to educate people about this issue.”

Russell and Johnson said innocent young people will suffer if the bill is overturned on the ballot. With a growing Hispanic population, Johnson said the U.S. and the Catholic Church can’t afford an uneducated generation.

Russell told the crowd “that there’s a lot of vitriol and passion when it comes to the issue of immigration – especially illegal immigration in particular.”