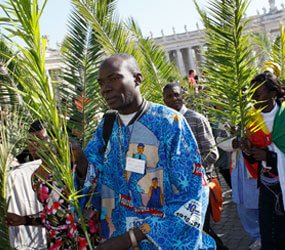 VATICAN CITY – Celebrating Palm Sunday Mass for 50,000 people at the Vatican, Pope Benedict XVI said the passion of Christ is a model for every Christian’s spiritual pilgrimage through life.

Following Christ is not easy, the pope said March 28. It’s an uphill path that often goes against contemporary trends.

“People can choose the easy way and avoid every hardship. The can descend toward the bottom, the vulgar. They can sink in the swamp of lies and dishonesty. Jesus walks ahead of us, and goes toward the heights,” he said.

The papal liturgy, celebrated in St. Peter’s Square on a beautiful spring day, began with a procession led by an international group of young people, who carried palm and olive branches in commemoration of Christ’s triumphal entry into Jerusalem a few days before his passion and death.

The pope, who turns 83 in April, rode in a white jeep to the altar, holding a garland of braided palm fronds. It was the first of nine Holy Week events for the pontiff and it came as he and other church officials faced questions and criticism from some quarters for their handling of the priestly sex abuse crisis.

The liturgy included a prayer that Pope Benedict, “chosen by God” to guide the church, “may find his strength in the suffering of Christ and his consolation in the light of Christ.” Another prayed “for young people and those who work to educate them and protect them.”

The Mass marked the 25th anniversary of World Youth Day, and the pope directed his homily toward young people. Being a Christian, he said, means modeling one’s life on Christ and following him toward what is true and pure.

It is a path that leads “toward life lived according to truth, and toward the courage that is not intimidated by the chatter of dominant opinions,” he said. The Christian pilgrimage inevitably leads one to be more open to people who are suffering or abandoned, and to be loyal and supportive of others when they face difficult situations, he said.

Following Christ is not something that can be accomplished alone in a spirit of pride or arrogance, the pope said. It requires a humble sense of belonging to the church and believing with the church, he said.

Ultimately, the Christian path leads to the cross, he said. As shown many times, he said, great results require great sacrifice, and “only a person who loses himself, finds himself.”

Christ’s pilgrimage led to Jerusalem, a real place where Christians today can follow in his footsteps, the pope said. The fact that people can still visit these places is important, he said.

“Faith in Jesus Christ is not a legendary invention. It is founded on a story that actually happened. This is a history that we can, so to speak, contemplate and touch,” he said.

At the same time, the pope said, for modern Christians Jerusalem is a spiritual reality that can be anywhere, because God is everywhere. Through Christ, the transcendent God became closer to human beings, he said.

“The God who is infinite is at the same time the God who is near. He cannot be closed off in any building, and he wants above all to live among us and to be with us completely,” he said.

The people who packed the square came from all over the world, and the liturgy featured prayers of the faithful in several languages, including one in Hindi asking for wise decisions by “those who govern the nations.”

At the end of the Mass, at a noon blessing, the pope issued a plea for peace in modern Jerusalem, saying he was “deeply saddened at the recent disputes and tensions” there. The tensions have focused on the announcement by Israeli Prime Minister Benjamin Netanyahu that Israel would not stop building in the West Bank territory it has unilaterally annexed to East Jerusalem.

The pope said Jerusalem was “the spiritual patrimony of Christians, Jews and Muslims, and the prophecy and promise of that universal reconciliation that God desires for the whole human family.”

He said peace must be achieved through responsible human decisions, involving dialogue, the respect of the rights of all parties and mutual forgiveness.

“Let us pray, therefore, that those responsible for the future of Jerusalem will courageously embark on the way of peace and follow it with perseverance,” he said.

The pope also noted that April 2 marked World Autism Awareness Day, and he said he was offering a special prayer for the initiative.

Speaking in English, he said Holy Week is the church’s most intense time of prayer and reflection. Palm Sunday, or Passion Sunday, recalls Jesus’ welcome into Jerusalem by the children, he said.

“Let us make their joy our own, by welcoming Christ into our lives, our hearts and our families,” he said.