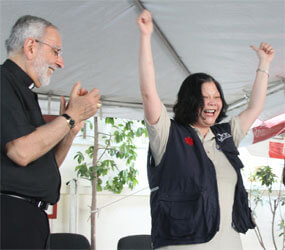 FOURTH IN A SERIES

In tears her first day at Purdue University because she couldn’t decipher a campus map, she found solace at its Newman Center. Woo met and married her husband at Purdue, and its church bell rang when she defended her doctoral dissertation there.

It is little wonder she accepted an invitation to give back to the faith and become the next president of Baltimore-based Catholic Relief Services.

“My whole life,” Woo said, “has been enriched by the church in deep ways.”

It is one that has taken Woo from a childhood in Hong Kong to dean of the Mendoza College of Business at the University of Notre Dame to CRS. Come Jan. 1, she will succeed Ken Hackett, who is retiring after 18 years as leader of the international relief agency of the U.S. Bishops.

The Catholic Review accompanied Woo, Hackett and Tucson Bishop Gerald F. Kicanas, chairman of the board of CRS, on a late October mission to Haiti.

Scrabbling over rubble in the Delmas 62 neighborhood that CRS is helping rebuild from the January 2010 earthquake that devastated the poorest nation in the Western Hemisphere, Woo asked questions that hinted at her ability to conduct an audit.

“Where are the cisterns?” she asked on a swelteringly sunny late afternoon, of rain catchment barrels.

Can’t leave them out, they get stolen.

Told of 300 local artisans whose goods are sold through the CRS Fair Trade program, Woo inquired, “Are they for sale on our website?”

Three whirlwind days later, during an interview on a typically bumpy ride to Toussaint Louverture International Airport and her flight back to the mainland, Woo incorporated three-part answers that seemed inspired by both her board background and the Trinity.

“The fact that I’m fluent in English is due to the Maryknoll sisters,” said Woo, whose family had fled mainland China during World War II. “What we got from them was not just academics, we got a sense of independence, to be encouraged to have and express your own ideas. They gave me a sense of empowerment in a culture where women don’t have a lot of opportunities.

“The third thing they imprinted upon me was an incredible sense of faith.”

The morning had included a farewell Mass for Hackett at the CRS compound here in the capital city. Woo is well-versed in the universal church, as her six-year term on the CRS board of directors began in 2004, the year of the Indian Ocean tsunami.

“My most powerful experience of that,” she said, “came after the tsunami, in southern India, standing with fishermen around mass graves that were decorated with flower petals depicting the Sacred Heart of Jesus, pierced by the crown of thorns.

“It was the same image I knew, it meant the same thing. We said the ‘Our Father.’ We sang ‘The Spirit is Moving,’ I had not sung that since I was a middle school student. … Whatever language Mass is being celebrated in, it’s the same reality.”

Woo will lead an organization of nearly 7,000 employees in more than 90 countries, with a budget of more than $900 million. Before Notre Dame, she was vice president for academic affairs at Purdue. Woo has sat on numerous corporate boards, mixing leadership and the living faith.

“First and foremost, she is a woman of faith, deeply committed to the church,” Bishop Kicanas said. “She’s taken the Mendoza College to new heights. She has innumerable contacts in the business world … Her ability to mobilize as government funding diminishes will be vital.”

From AIDSRelief to providing pure water, CRS hands down not just relief resources, but expertise.

“The Chinese,” Woo said, “have a saying, ‘The best teachers take pupils beyond where they are.’ The exact journey of training a Ph.D. student is to mentor the person to the point where they exceed your work. That model, subsidiarity, is not a mystery to me.”

This is the fourth and final installment in a series of reports by Catholic Review Managing Editor Paul McMullen on his travels with a CRS delegation in Haiti. His accommodations in Port-au-Prince were provided by Catholic Relief Services.

To read more about CRS in Haiti, visit CatholicReview.org/mcmullenblog.