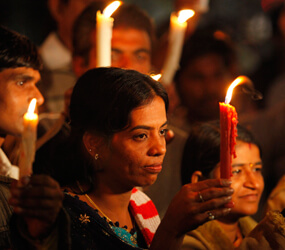 “The magnitude of the tragedy was so powerful, even now people are suffering from its aftermath,” said Father Anand Muttungal, secretary of the Madhya Pradesh state bishops’ commission on ecumenism and dialogue, which organized the event.

About 3,000 people died Dec. 3, 1984, when 40 tons of deadly methyl isocyanate gas escaped from a chemical plant owned by the Union Carbide Corp. in Bhopal.

Many survivors and those born since then suffer from breathing difficulties, gastrointestinal problems, menstrual irregularities, miscarriages and neurological problems, Father Muttungal said. Other common ailments include susceptibility to infections, chromosomal abnormalities and chronic conjunctivitis, he added.

Later generations are paying “a huge price,” Father Muttungal said. “We need to become more conscious of the dangers when industries like this build plants around the world.”