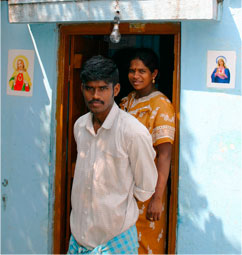 KOLAR GOLD FIELDS, India – A statue of Jesus stands surrounded by idols and portraits of Hindu deities in a tailoring shop, just one way some “dalits,” or members of low castes, try to hide their Christian identity.

While more than one-third of the 200,0000 people in Kolar Gold Fields are Christians – an overwhelming majority of them dalits – many dalit Christians hide their religion to escape the constitutional discrimination they live with if it is made public.

“This is not because of their lack of faith or trust in God. It has to be seen in the context of their poverty,” Antony Madali Muthu, a Catholic dalit activist in the mining town, told Catholic News Service.

In 1950, the Indian government reserved 15 percent of the slots in schools and government jobs for dalits and guaranteed free education for dalits. While this was confined to Hindu dalits, the rights later were extended to Sikh and Buddhist dalits.

However, the Christian and Muslim dalits are denied these rights.

Once the children of Christian dalits declare their religion as Christian, they will not be entitled to free government scholarships, nor will they be eligible to apply for the quota in educational institutions and government jobs.

Father Joseph Abraham, head of the eight parishes of Kolar Gold Fields, told CNS that in the 1970s some of the priests who looked after the Catholic population in the mining city encouraged the church members to use common names such as Kumar or Shanti instead of Christian names like Joseph or Mary. This was to prevent government officials from easily identifying them as Christian dalits when they got the mandatory dalit certificate for free education and job slots.

Madali Muthu means Mary Magdalene in Tamil; Muthu told CNS that many poor dalits do not use common Christian names.

“It is a question of survival for them,” Muthu added.

While the mining town has witnessed the rapid proliferation of evangelical groups in recent years, Gnanaprakasam said most of the converted dalits “do not want to lose their rights as Hindu dalits.”

In fact, several Christian dalit women put a bindi, or round spot, on their foreheads like Hindu women, which Christian women normally do not do.

Similarly, most miner hamlets will have a temple and a chapel on both ends, making it difficult for the government officials to identify the Christians.

“As long as the government discrimination against dalit Christians continues, the situation will remain the same,” said Gnanaprakasam.