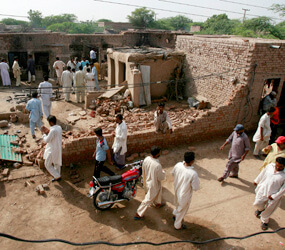 KORIAN, Pakistan – The Christian village of Korian in the Punjab province of Pakistan was destroyed July 30 in a violent raid by thousands of Muslims.

Korian was the home of about 100 Christian families, most of them laborers, the Asian church news agency UCA News reported. They fled the area after the attack. No one died in the incident.

The village in the Faisalabad Diocese in the eastern part of the country was attacked after Muslims accused a family there of blasphemy. In all, 60 houses and two churches belonging to the Church of Pakistan and the New Apostolic Church were destroyed and livestock was stolen.

“They have left nothing. My horse, my only source of income, has also been taken,” said Shubaan Masih, a local Christian.

The mob also blockaded the road leading to the village for several hours, refusing entry to police or firefighters.

Masih said the mob was armed with firearms and explosives.

“They used trucks to break the walls and petrol to start the fires,” he said. “We saved our lives only by hiding in the fields until 3 in the morning, when relatives arrived with vehicles to collect us. The children cried all night,” Masih said.

Tension between the Christian and Muslim communities in the area arose after pages containing Islamic inscriptions were found in front of a Christian home July 26 following a wedding. It was not clear where the inscriptions came from or what they said, but during the intense questioning of those who attended the wedding, a group of Muslims accused the Christians of desecrating the Quran, the sacred book of Islam, witnesses said.

The family said it had no knowledge of the offense but nevertheless apologized July 30, saying that children could have been responsible.

“One cannot but weep upon seeing the trail of destruction left behind,” said Father Aftab James Paul, director of the Faisalabad Diocese’s Commission for Interfaith Dialogue.

“It is yet another example of a feud being given a religious color. We shall visit the police station and demand the arrest of the instigators of this terrorism,” he said.

According to media reports, Punjab Chief Minister Shahbaz Sharif also strongly condemned the incident and expressed his sorrow over the destruction of homes and loss of livestock.

Reports said that Sharif has directed authorities to secure the area and control the situation.