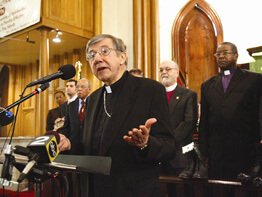 The 13 religious leaders from varying Christian faiths – which included Auxiliary Bishop Denis J. Madden of the Archdiocese of Baltimore – chose the first day of lent to launch their collective anti-war platform, because it’s a penitential season.

“The time has come to confess our mistakes and wrongdoing and withdraw our troops (from Iraq),” said Rev. Dr. Peter K. Nord, executive presbyter of the Presbytery of Baltimore, one of the speakers at City Temple Baptist Church in Bolton Hill. “The Jesus we follow prays for peace and so do we. I’m troubled that our commander in chief neither shares this prayer nor listens to his people.”

In an effort to pump up the volume and force President Bush to hear their opposition to his war policies and troop surge, the group urged Maryland Christians to travel to Washington March 16 and surround the White House in a non-violent, candle-lit demonstration.

A group called Christian Peace Witness for Iraq is hosting a 7 p.m. service March 16 at the National Cathedral in Washington. Following the service, they will march the 2.5 miles down Massachusetts Avenue to the White House for the rally, which is expected to run from 9 to 10:30 p.m.

People wanting more information about participating in the rally can log onto the group’s Web site at www.christianpeacewitness.org, or call them at 520-780-6928.

“We can not remain silent while American men and women in increasing numbers are being sent to Iraq to kill and be killed,” said Bishop John R. Schol of the Washington Episcopal Area Baltimore-Washington Conference. “While thousands of Iraqi people needlessly suffer and die … poverty increases and preventable diseases go untreated.”

The morning of the Ash Wednesday press conference, the United Kingdom announced it would begin to withdraw 40 percent of its troops in Iraq in the next year, an example the Baltimore Christian leaders want President Bush to follow.

“Our leaders have a moral obligation to honestly examine where things really stand in pursuing peace in Iraq and to assess what is actually achievable there by our continued presence,” Bishop Madden said. “May this day and march that is to follow be enlightened by the great splendor of truth and aid us on the path to peace.”