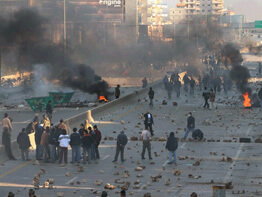 BEIRUT, Lebanon – When clashes broke out during a nationwide strike in Lebanon, some of the worst fighting rocked Christian areas, where rival factions live cheek by jowl.

Some Lebanese Christians support the Syrian-backed Hezbollah movement and its Shiite Muslim allies, whose strike aimed to topple the country’s U.S.-supported Cabinet. Others have aligned themselves with the government of Prime Minister Fouad Siniora, a Sunni Muslim.

On Jan. 23, the day of the strike, thick plumes of smoke hung over the capital and the stench of scorched rubber and gasoline filled the air as all main arteries into the capital and its airport were blocked by piles of rubble, burned-out cars and burning tires. Scores of Hezbollah-allied protesters milled around each blockade, the Christians among them easily identifiable from their bright orange scarves and hats that signify the Free Patriotic Movement, founded by former Gen. Michel Aoun, a Maronite Catholic.

Free Patriotic Movement supporters said they were exercising their democratic right to protest against a Cabinet that lost its legitimacy when all five of its Shiite ministers resigned in November.

But the leader of the predominantly Christian Lebanese Forces, Samir Geagea, said Jan. 23: “This has nothing to do with democracy or freedom. This has been transformed into a coup d’etat. It is a revolt in every sense of the word.”

According to Lebanon’s Constitution, the presidency is designated for a Maronite Catholic. Former President Amin Gemayel, a member of the country’s most prominent Catholic political family, called for an immediate end to the strike violence that left three people dead and more than 170 wounded.

“Events, especially in Christian areas, look like internal fighting. This is very painful,” he told the Christian Lebanese Broadcasting Corp.

“We paid a heavy price in the past because of internal fighting and the war of elimination,” he said. “The struggle must stop immediately and be moved from the street to the table of dialogue.”

In eastern Beirut, an old woman with a shopping bag full of groceries picked her way home through the rubble-strewn streets. She scowled at the baying protesters and said: “If it’s like this tomorrow, you can say goodbye to Lebanon.”

The opposition movement called an end to the protests late Jan. 23 as demonstrators began removing roadblocks from across the country.

However, Georges Haddad, a spokesman for the Free Patriotic Movement, promised “new actions on a bigger level” within the next few days if the government did not accede to opposition demands for the formation of a new government.

Days before the strike, the Maronite patriarch, Cardinal Nasrallah P. Sfeir, criticized Lebanon’s opposition and pro-government factions for not reaching a compromise.

Cardinal Sfeir remained neutral in his position between the two camps, saying at Mass Jan. 21 that those who opted to strike and those going to work both had the right to their respective decisions.

However, he noted that saboteurs might seek to provoke fights during the strike, particularly in Christian areas.