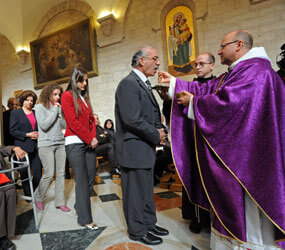 OSLO, Norway – The presence of Christians in the Holy Land is a force for peace and harmony in the region, particularly because of the education and health care they offer to all, said U.S. Cardinal John P. Foley, grand master of the Equestrian Order of the Holy Sepulcher of Jerusalem.

But Christians are leaving the Middle East in record numbers, he said during a conference Dec. 4 in Oslo.

The Knights of the Holy Sepulcher support the church in the region and the Christians who remain. Since 2000, the cardinal said, the order has given more than $50 million in assistance to Catholic, ecumenical and interreligious initiatives, but mainly to Catholic-run schools, hospitals and clinics.

Because the Catholic health, education and welfare agencies help all people – not just Catholics – and bring Christians, Muslims and Jews together, he said the Christian presence in the region is a “source of hope for understanding, peace and reconciliation.”

The diminishing percentage of Christians in the Holy Land’s population is not simply the result of Christians leaving, but is also due to the influx of Muslims into the Palestinian territories and Jordan because of the region’s wars, he said.

And, he said, “it also appears to be a demographic fact” that Muslims in the region have more children than the area’s Christians or Jews do.

Cardinal Foley said the demographic shift seems to be a concern for Israeli authorities.

“The present foreign minister of Israel had been quoted, before he assumed his present office, as favoring the departure from Israel of its Palestinian citizens,” said Cardinal Foley. “Thank God that no such action has been taken, but it does contribute to a feeling of insecurity and indeed of second-class citizenship on the part of the non-Jewish citizens of Israel.”

After his introductory remarks, Cardinal Foley read a report on the region’s population statistics and Christian emigration prepared by Monsignor Robert L. Stern, secretary-general of the Catholic Near East Welfare Association.

Monsignor Stern said that with the exception of Israel, “there are few really reliable statistics about Middle East country populations.”

One fact is clear, he said: the percentage of Christians in the Middle East populations is declining drastically, not only because of emigration but because Christians tend to be more educated than the majority of their neighbors and higher levels of education tend to lead to smaller family sizes.

Monsignor Stern said that unlike Judaism and Islam, which are strongly bound to specific holy places, Christianity is called to be universal and to exist anywhere and everywhere.

“There are no geographical imperatives to Christianity,” he said.

While Christianity’s historic roots are in the Holy Land and “there is no place so evocative to visit for Christians as the Holy Land,” if one day there were not a single Christian left in the land of Jesus’ birth, death and resurrection “it will not hurt Christianity fundamentally.”

“Sadly, at the rate things are going, we may be coming very perilously close to that,” Monsignor Stern wrote.

The disappearance of the region’s Christians would be bad for the rest of the population as well, he said.

“Christianity is a bridge to the future for the Muslim world,” he said. For example, the separation of church and state and the respect for religious freedom enshrined in the documents of the Second Vatican Council and “rooted deeply in the teachings of Jesus” are values the Muslim world must accept to be integrated into modern society, he said.

Monsignor Stern also cautioned against Middle East Christians defining themselves as Westerners in opposition to the Arab, Muslim majorities of most of their neighbors, which creates a sense of separation and foreignness.

The monsignor stressed the importance of not blaming Christians who leave in search of a better life for themselves and their families, taking with them important faith and family values that they contribute to their new communities.

“Emigration isn’t necessarily an evil,” he said. “But it does involve a loss. There’s a patrimony and a culture that is being lost with the exodus of Christians.”

Monsignor Stern encouraged members of the Knights of the Holy Sepulcher and all people concerned about the situation in the Middle East to provide material aid to the Christians in the Holy Land and to lobby their own governments to work for peace and justice in the region.

In addition, he said, Christians outside the Holy Land must “help those who wish to migrate: welcome them” and help them establish themselves in their new homes.