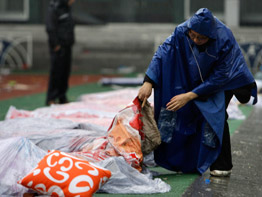 CHENGDU, China – Chinese priests had to work around disrupted telephone systems and damaged roads as they tried to assess the damage from the May 12 earthquake centered under Sichuan province.

Responding to appeals for aid and prayers on Catholic Web sites, Catholics across China have begun donating money and clothes to help survivors, the priests told the Asian church news agency UCA News.
The magnitude 7.9 earthquake, which hit just after midday May 12, had its epicenter beneath Wenchuan County in Sichuan province. Wenchuan is less than 60 miles northwest of Chengdu, the provincial capital.

By May 13, government officials reported more than 12,000 people had been killed in the quake, but the death toll was expected to rise. Officials said in one city alone more than 19,000 people were buried in the rubble.

Father Simon Li Zhigang, administrator of the Chengdu Diocese, told UCA News May 13 that he could not reach by phone the priests serving in Wenchuan and Beichuan. About 100 Catholics live in Wenchuan and several hundred more in Beichuan, he said.

In the Nanchong Diocese, about 150 miles from the epicenter, Sister Wang Yan told UCA News the activities room added to their church building shook for seven minutes and almost everything fell to the floor.

“I thought it was the end of the world,” she recalled.

The night after the quake, dozens of laypeople stayed inside a wooden church in Nanchong because they feared sleeping in their damaged brick houses, she said.

In the neighboring Chongqing Diocese, Father Xie Bangyong told UCA News fissures appeared in some old churches after the quake, but all priests and nuns in the city were safe. Chongqing priests divided into groups to see if parishioners were safe and assess damage to old churches, but it was difficult to contact Catholics in the affected areas, Father Xie added.

Auxiliary Bishop Paul He Zeqing of Wanxian told UCA News the residence for priests and another for nuns in Liangping became unsafe after the quake and was vacated immediately.

“Other churches, all newly built, are not affected,” he said.

Bishop He led Catholics in praying for the quake victims during a May 13 morning Mass and urged them to donate to relief efforts.

The Chongqing and Wanxian dioceses are in the Chongqing municipality, formerly part of Sichuan.

Jinde Charities, in China’s Hebei province, appealed on its Web site for prayers and donations for the quake survivors. As a Catholic nonprofit organization registered with China’s Ministry of Civil Affairs, Jinde provided aid during last summer’s flooding in Chongqing and during snowstorms around the Chinese new year earlier this year.

In an appeal to potential donors, Bishop Peter Feng Xinmao of Jingxian, chairman of the board of Jinde Charities, said as soon as roads were cleared Jinde planned to send a team of 20 nuns to help meet victims’ medical needs. The bishop said Father Li Zhigang of the Chengdu Diocese reported many church buildings were either completely collapsed or seriously damaged. The bishop also said a priest in Dujiangyan reported that 80 percent of the houses in the city were uninhabitable.

Bishop Feng said the Taize Community in France had pledged 10,000 euros (US$15,500), but “the gap between the needs and the resources is still huge.”

“Now, with great trust and confidence, we’d like to turn to you, our dear and loyal friends, for support and help,” the appeal said.

In eastern China, the Shanghai Diocese donated 1 million yuan (US$143,000) for earthquake relief, the diocese’s Web site reported. Bishop Aloysius Jin Luxian of Shanghai directed all parish priests to pray for victims and survivors during special eucharistic adoration sessions May 18 and donate Mass collections that day to the relief effort.

In northeastern China’s Heilongjiang province, Bishop Joseph Wei Jingyi of Qiqihar circulated a prayer he wrote asking God to look after the people who were physically and spiritually wounded by the disaster.

In southern China, the Zhongshan-based Tianrun Service in the Jiangmen Diocese used its Web site to urge Catholics to donate medical aid, clothes, tents and money that it would send through the government’s civil affairs department or charitable organizations.

At the Vatican, Fides, the news service of the Congregation for the Evangelization of Peoples, said Catholics in the Diocese of Yi Bin, about 180 miles from Wenchuan, began organizing assistance immediately.

“One of the faithful told us, ‘We are followers of Christ; we must witness to Christ in every circumstance, especially at a time like this. We are praying for the peace and safety of our brothers and sisters, for our country, for everyone,’“ Fides reported.