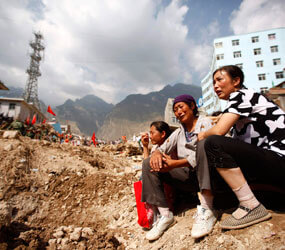 LANZHOU, China – Catholics across China paid tribute during the feast of the Assumption to those who died in a mudslide the previous week.

Churches canceled festivities such as fireworks, concerts and children’s song and dance performances normally featured during celebrations for the feast of the Assumption.

About 1,000 Catholics in Lanzhou Diocese observed a three-minute silence before the inaugural Mass at St. Francis Xavier Church in Jiayuguan.

Father John Baptist Yang Zongxue also spoke to churchgoers about conservation; many experts believe the mudslide was caused by deforestation and overdevelopment.

He called on the gathering to protect God’s creation and refrain from “damaging ecological harmony.”

The ecological theme was also picked up in neighboring Ningxia Diocese where Father Francis Gao Tianting told his parishioners that “all these happenings are a warning to us. We should do our very best to care for nature by saving energy and living a low-carbon life.”