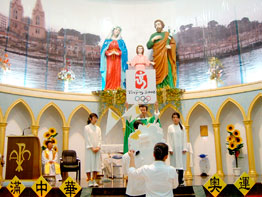 SHAJIANG, China – A Catholic parish not registered with the government celebrated a Mass to pray for the success of the Beijing Olympics, and the celebrant urged parishioners to link their spirituality to their daily lives.

Father John Baptist Luo Wen, the parish priest and a self-declared sports fan, told the Asian church news agency UCA News that the Aug. 7 Mass aimed to help his Catholics and non-Catholic neighbors understand that “Chinese Catholics are forever patriotic, which is part of the nature of Catholicism,” especially when such a big international event takes place in China.

His hope, he added, is that his parishioners would not keep their spiritual life separate from their worldly life.

Father Luo and his assistant, Father Joseph Liu Maochun, concelebrated the Mass at Shajiang Church in the Diocese of Mindong. Shajiang is in northeastern Fujian province, 930 miles southeast of Beijing.

During the offertory, Catholics placed the official emblem of the Beijing Olympics and three of the five official mascot dolls on the altar, symbolizing their dedication of the games to God. Each doll had a flag bearing a Chinese rendition for each word in the Olympic motto.

On the stairs leading to the altar, two scrolls were displayed, each with a five-word Chinese slogan. They translated to English as “God’s Love Fills China” and “Olympic Games Show Strength of the Nation.”

After the Mass, parishioners Zhu Xiaoyan and Chen Dandan told UCA News that Father Luo helped them feel the church is concerned about the nation and their daily lives.

Two young Catholics, Lin Jiabin and Zhu Jingping, said Catholics should pray for the country because it is hosting such a great event in the wake of several disasters, including the serious earthquake in China’s Sichuan province in May.

At the Mass, parishioners asked God to protect the games. They also prayed that the athletes would avoid using drugs and compete fairly and that the judges would act fairly so that competitors who trained hard would get an equal chance.

Other diocesan parishes not registered with the government also prayed for the Olympics at Masses a few days before the games started, UCA News reported Aug. 12.

Earlier in August, UCA News reported that unregistered Catholic clergy – including bishops – who work near Beijing faced restrictions on their work as the Olympics approached.

The Chinese government requires the registration of bishops and church communities. Some Catholics view registration as a tool for control and prefer to exercise the faith in a semiclandestine manner. Pope Benedict XVI has urged Catholics from both communities to unite.