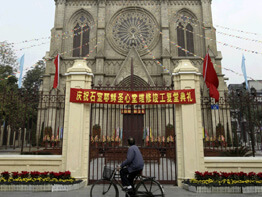 Mr. Han, who attended the Feb. 9 Mass celebrating the formal opening of Sacred Heart of Jesus Cathedral in Guangzhou Diocese, said he feels the cathedral is a more comfortable place to worship now that it has been renovated. He said he was amazed each time he looked around at the new altar, furniture, stained-glass windows and other changes.

More than 1,000 Catholics attended the Mass to mark the occasion. Bishop-designate Joseph Gan Junqiu of Guangzhou celebrated the Mass, and Bishop Joseph Liao Hongqing of Meizhou as well as 11 priests from Guangzhou and neighboring dioceses concelebrated.

The cathedral reopened formally after more than two years of renovation. Masses had resumed at the cathedral in mid-December.

It is one of the largest Gothic churches in China with a floor area of 3,305 square yards. Constructed with large granite blocks in 1888, the cathedral is commonly known as “Stone House Church.”
Church volunteer Li Zhewen said the renovation created “a much, much better environment for evangelization.” In the past, he said, the electric wiring inside the church was messy, and some of the light bulbs did not work. The church now has large crystal chandeliers in place of the dim light bulbs.

Edith Cahansa, a cathedral choir member who teaches English in Guangzhou, said the “big church can now accommodate more people.” For two years while the cathedral was renovated, people had to squeeze into a temporary 840-square-yard chapel.

Ms. Cahansa told UCA News she admired the newly installed stained-glass windows that were designed and produced in the Philippines, her home country. The windows contain 98 glass panes portraying Bible stories and saints.

Father Joseph Huang Bingzhang of the Shantou Diocese said when he was studying at the minor seminary in the cathedral compound in the 1980s, a window pane fell to the ground during Mass.
“A church is not only for worshipping God but also must be a safe place for the faithful,” he said.

The priest, chairman of the Guangdong provincial Catholic Patriotic Association, said he believes the renovated cathedral could raise the profile of the church in Chinese society.

“It is a testimony to church history,” he said.

A Chinese church worker told UCA News that Catholics are grateful for the government’s support of the renovation, since there are not many Catholics in Guangzhou, about 80 miles northwest of Hong Kong. Without government funding, the project would not have materialized, she said.

The municipal government contributed about 80 percent of the total renovation cost, said Bishop-designate Gan, who was recently approved by the Vatican as the bishop of Guangzhou.