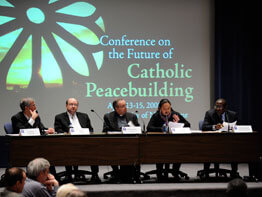 NOTRE DAME, Ind. – Participants at the Conference on the Future of Catholic Peace-building who are in the throes of violence and conflict at home could get a hopeful glance at a possible peaceful future from Eduardo Rojas of Santiago, Chile.

Mr. Rojas, a human rights specialist and director of planning and development at Cardinal Raul Silva Henriquez Catholic University in Santiago, can tell the horror stories of the regime of Gen. Augusto Pinochet, when thousands were executed and tens of thousands exiled.

Today, Chile receives thousands of people into its peaceful, stable society from violent zones in Africa, the former Yugoslavia and Colombia. It has the largest Palestinian community in South America, if not the entire Western Hemisphere.

“Chile was in a very difficult situation during the Pinochet dictatorship, and the Catholic Church had a fundamental role in resolving it peacefully,” Mr. Rojas told Catholic News Service through an interpreter during the April 13-15 conference at the University of Notre Dame.

“Today, Chile is a country that lives in peace. It is a very stable economy,” he said. “Now it’s kind of a focal point for people in a peaceful period. Reconciliation has happened. Of course, it’s never complete.”

The key to the change, he said, was the establishment of national institutions that people could trust, including a tireless demand for a system of legal justice.

“That’s only thanks to the process where we could establish institutions we could rely on,” Mr. Rojas said. “One of the central things we learned during the dictatorship was a sense of respect for the rule of law.

“An example: In the first few years of the war, when there were a lot of people detained for political reasons and ‘disappeared’ people, the church initiated a habeus corpus (writ) before the justice tribunals. They insisted on setting up a legal process,” he told CNS.

Even though only 10 of 9,000 cases were accepted by the Supreme Court, establishing a system for such records brought about justice years later.

“The people said: ‘This is a waste of time. It’s crazy to keep pursuing justice. There is no justice,’“ Mr. Rojas said. “But time showed that continuing to insist on the path of justice left a historical testimony, and it created a path for the victims.”

In fact, the records have helped the prosecution of hundreds of thousands of people since Pinochet fell in 1990.

“There are now 300 military officials who have been brought to justice, thanks to all the testimony and all that work,” he said. “That’s just one element, but in my experience it’s very important. It was an opposition based on ethics and morality. It gave people a way to oppose Pinochet.

“It’s possible to oppose a violent system by way of insisting on a path of justice,” he added.

Another important step was the establishment of a National Truth and Reconciliation Commission.

“In Latin America, that seems to be a key, important, clear element,” Mr. Rojas noted. “Out of that commission came the mechanism of reparations for the victims,” including health, education, university scholarships and retirement, as well as symbolic reparations such as mausoleums, historical markers and other ways of keeping the memory alive.

“The church has started an education process for understanding human rights,” he said, adding that students must take two courses in human rights at his university regardless of their major.