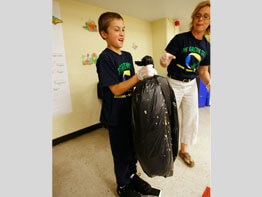 CHICAGO – St. Monica Catholic Academy in Chicago looks like plenty of other Catholic schools: clean and neat, with lots of student-created artwork on the walls.

But the seeds of an idea that have germinated at the school are now beginning to grow and bear fruit.

St. Monica is the first environmental academy in the Archdiocese of Chicago with a curriculum its faculty wrote in cooperation with education experts from the Chicago Botanic Garden.

The students, ranging from preschoolers to eighth-graders, will learn about ecology and how to care for the environment on a campus that will include solar panels on the roof, a permeable concrete parking lot, native plantings and an urban farm.

Physical changes to the campus began in spring of this year. Currently six solar panels on the roof provide electricity for some classrooms, courtesy of the Illinois Clean Energy Community Foundation. During the summer the Illinois concrete industry rebuilt the parking lot with heat-reflecting “whitetop” and pervious concrete that allows rainwater to flow through to the ground.

Students have already embraced the school’s initial efforts. Last year’s third-grade students called themselves the “green team” and spearheaded a plan to increase recycling at the school. The school’s preschool and kindergarten students have worm composting bins; the worms and micro-organisms eventually convert the contents into compost.

“It’s amazing how the students have taken this home and talked to their parents, and it’s affected their neighbors, too,” said Renee Rosenbusch, the third-grade teacher who coordinates the recycling project.

She told the Catholic New World, Chicago’s archdiocesan newspaper, that the school used to recycle only paper but now it recycles aluminum, plastics and other materials.

Last fall her class did a “trash audit,” keeping and sorting its trash for four days. The students found that they generated 86 pounds of refuse; of that, 12 pounds of paper were recycled. Since then, with the addition of recycling for aluminum, plastics and other materials, the school recycles 35 percent to 40 percent of its waste.

Needless to say, the project offered lots of opportunities to incorporate math.

Much of the remaining waste was food scraps from the cafeteria, which could be put into a compost pile, said Rosenbusch, who is considering that as a possible project for the third-graders in the new school year.

“I don’t know anything about composting,” she said, “but I’ll learn about it along with the kids.”

Meanwhile, the fourth-graders will be growing micro-greens to be transplanted outside as food crops.

The projects are part of the school’s Student Environmental Education and Development Studies curriculum, known as SEEDS, developed over the past three years in consultation with the Chicago Botanic Garden. While some components were put in place last year, the complete curriculum will be rolled out during this school year.

The green effort stems from Father Ted Schmitt, pastor at St. Monica Parish. When he asked the Chicago Archdiocese’s Office for Catholic Schools what parish and school officials should do to make St. Monica an academy, he was told the school needed to develop an area of expertise that would permeate the entire curriculum.

The parish and school explored technology, the arts and ecology as possible subject areas, and when it was put to a vote of the faculty, the parish staff and the parish pastoral council, an overwhelming majority chose ecology.

The school created a new mission statement, which says in part that it prepares its students “to claim their places as students of God’s creation.”

Principal Ray Coleman and the faculty agreed to move forward on the environmental focus more than two years ago and started planning. During the last school year, some elements, such as recycling and worm composting, were put into place.

Over the summer the faculty focused on further integrating the curriculum with Catholic teaching.

Junior high science teacher Tamara Kiszynski is looking forward to the day when the gardens are there for students to experience cultivating the earth, and the urban farm can help feed the students.

Kiszynski has included environmental topics in her science classes for at least 20 years and said she’s thrilled to see it spread across the curriculum.

“I’m hoping these are far-reaching fingers that will extend into all areas of their lives,” she added.