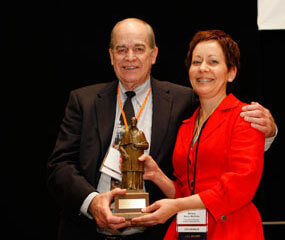 Cecil “Chic” Davis, The Catholic Review’s longtime advertising director and general manager, died May 31. He was 71.

Davis was diagnosed with lung cancer in January after being admitted to the hospital in late December.

The Catholic Review’s publisher, Archbishop Edwin F. O’Brien, said he was saddened to hear the news.

“Chic’s death leaves a tremendous void for those who knew and loved him, and for the paper to which he gave so many years of dedicated service,” the archbishop said. “He brought a level of expertise and passion to his work, and approached each day with faith-filled joy as he sought to proclaim the good news to The Review’s many readers.”

Born Dec. 18, 1939, Davis was among the most highly respected members of the Catholic Press Association and was given its most prestigious honor, the St. Francis de Sales Award, in 2008. He was regularly honored by the CPA for other awards and also received recognition from the Maryland, Delaware D.C. Press Association.

He led local, regional and national workshops on newspaper advertising for the CPA and American Advertising Federation, and served as a consultant to other newspapers, regarding their advertising and business strategies.

Prior to coming to The Catholic Review in 1999, Davis ran his own business, Davis & Associates/ACC Publishing. He worked as The Sun’s director of marketing and communications for 10 years. He also served as director of The Advertising Association of Baltimore for nine years.

Along with his friend Daniel Medinger, former associate publisher and editor of The Catholic Review, Davis helped develop the newspaper’s parent company, The Cathedral Foundation, into a Catholic publications leader.

Medinger called Davis “a generous man with a big heart, an energizing colleague and a great friend.”

Medinger said that Davis was celebrated for his business acumen.

“He was an expert in advertising and he had a keen understanding of all aspects of business,” Medinger said. “Marketing was Chic’s specialty and he had a wonderful way with words. Actually, he had a gift for analysis and presentation. He could read deeply into dense research data and find a way to make the results sound like poetry.”

Employees, Medinger said, routinely visited Davis’ office to seek advice. Medinger added that Davis helped develop advertising programs for publications across the country and was a “tireless champion of the Catholic press.”

When Medinger left in early 2009, Davis served as interim associate publisher until Christopher Gunty was hired during the summer of that year.

“I had the chance to work with Chic Davis before I joined the Review and during my time here, and I had great respect for him,” Gunty said. “He was always willing to share his knowledge and insight with others in the Catholic press, and many in our industry will miss that.

“But I got to know him even better two years ago when I came to The Cathedral Foundation and The Catholic Review, and I came to rely on him for a lot of day-to-day input. He loved newspapers, he loved this business and he loved the people he worked with. I will miss my friend and his flashy ties, his warm smile, his encouraging words and his constant support.”

Tom Schmidt, former general manager of the Catholic Standard, newspaper of the Archdiocese of Washington, said he was shocked and saddened by the news of Davis’ death. “Chic was the best; he worked tirelessly for the Cathedral Foundation, and for countless others in the Catholic press.”

Gunty regularly spoke to Davis during the course of his illness, visited him while he was in the hospital and provided updates to Catholic Review employees. Davis always wanted them to know one thing: he loved them and couldn’t wait to get back to work.

A scholarship has been created in Davis’ name.

Make checks out to Advertising Association of Baltimore Fund.

Please note that it is for the Chic Davis Scholarship.