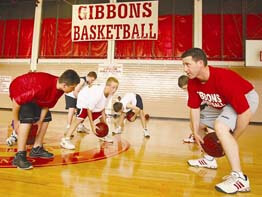 Where else would Jeff Cheevers be on a steaming hot day in June, but in a sweltering gymnasium full of kids, basketballs and whistles.

Cheevers, the athletic director and head basketball coach for The Cardinal Gibbons School, Baltimore, loves hoops and he loves kids, as evidenced in his first year of rolling out the Jeff Cheevers Basketball Camp for kids ages 7-17.

Cheevers has a gentle way about him that draws in kids of all ages, which led Cheevers to be named the 2007 Baltimore Catholic League’s Coach of the Year.

“We teach kids of all ages and all abilities,” Cheevers said. “Competition is not the main focus; it’s more of a teaching camp.”

“Our goal is definitely to promote the school. We hope that a feel for the campus and a look into our basketball program here at the school will make a good memory for all of our participants,” said Cheevers.

Cardinal Gibbons’ basketball program remains rich in tradition from the years of the late Ray Mullis to the recent years of the late Bob Flynn. Cheevers had the opportunity to work with Bob Flynn, former head coach of the Crusaders, and learned a tremendous amount about camp logistics, priorities and how to get the most from each participant.
Tyler Westphal, a seventh-grader at Cardinal Gibbons, is returning to the camp for a second year. “I like Coach a lot, and I want to play for him someday,” said Tyler.
Westphal went on to say that his father, Frank, was a graduate of Gibbons and looks to keep the tradition alive.

Cheevers is assisted at the camp by several of his varsity players whose responsibility it is to run various learning stations, coach the teams in afternoon scrimmage sessions, referee and serve as ambassadors for Cardinal Gibbons.

Danny Korecki, the team’s center who has since graduated and is ready to enter Frostburg State University in the fall, has worked at the camp for the last five years. “I started out as a camper in the summer of my eighth-grade year and loved it,” said
Korecki, who then worked his way into serving as a staff person. “For Coach Cheevers, it’s all about learning the game.”