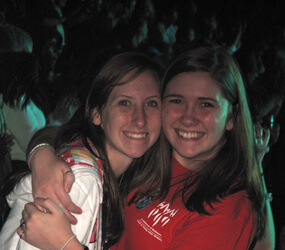 KANSAS CITY, Mo. – Adults talking sexuality with a bunch of teens is typically a recipe for awkwardness. So, when a husband and wife team, Jason and Crystalina Evert, stood in front of 21,000 teenagers Nov. 20 and preached the values of chastity, the last thing anyone expected was for it to go over like gangbusters.

But, that’s exactly what happened.

At the end of the Everts’ nearly 40-minute presentation at the National Catholic Youth Conference inside the Sprint Center, the teens rose to their feet and applauded wildly.

“Girls, turn the tables,” Jason Evert said during his segment. “Let the boys be afraid to lose you unless they know how to respect you. If you have to lower your morals to find love, it’s just not love that you’re finding.”

That prompted some to yell “Amen!”

Crystalina Evert talked about the partying and sexual experiences she indulged in during her teen years. She found comfort in God and changed her life. She said young women can always turn their lives around.

“It doesn’t matter what you’ve done or what has happened to you,” she said. “All that matters right now is where you’re going.”

Amidst the crowd were teens from the Archdiocese of Baltimore, some of whom have seen the couple in their videos, “Theology of the Body for Teens.”

The next day, during lunch, young parishioners of Sacred Heart in Glyndon sat around a table at a downtown restaurant sharing their thoughts on the talk.

“That man is the reason for this ring on my finger,” said Katie Lutz, a fan of Jason Everts’ effort to promote chastity until marriage.

Sexual temptation is something teenagers face.

“I’m 17, I have a girlfriend,” Josh Twery said. “There’s pressure there. What (the Everts) said put some perspective on things.”

“I think guys want it too,” Boyd said.

“I guess if you stand up for God and you practice what you believe, you can do no wrong,” Ben said. “Your reward will be greater later on and you’ll have a much greater marriage.”