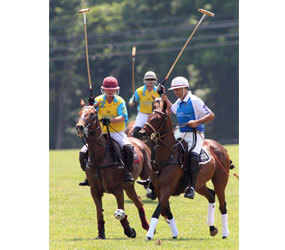 Clarksville – Attendees at the Ten Oaks Cup Polo Match in Clarksville June 12 could not have asked for a better day. The sunny, breezy weather brought out tailgaters in sundresses, khakis, and, for many of the ladies in attendance, the requisite sunhat, all in support of Our Daily Bread Employment Center in Baltimore.

“It’s a little bit incongruous to think about a polo match raising money for a soup kitchen,” said Our Daily Bread program manager Dennis Murphy. “But this polo match, hosted by St. Louis Church parishioners Mary Agnes Lewis and her husband Dr. Fred Lewis, an equine veterinarian, on their Ten Oaks Road property, has raised about $200,000 for the center since the match’s 2005 inception.

Saturday’s polo match sought to continue that effort. Professional polo player Charles Muldoon said the idea for a charity polo match started with a casual conversation in the Lewis family kitchen between himself, Mary Agnes. Lewis, and her son Jim Lewis. A volunteer at Our Daily Bread since its beginnings, Mary Agnes Lewis said she had always wished she could do more for the center.

Muldoon, who organizes charity polo matches all over the world, said he told Mary Agnes Lewis if she ever wanted to do a charity match for the center, it could happen right in the pasture that makes up her front yard. “It doesn’t cost any money to put this on, so all of the money raised goes to Our Daily Bread,” said Muldoon.

Mary Agnes Lewis explained all of the riders and their horses play for free, and she and Dr. Lewis “absorb whatever expense there is here.”

Their daughter, Joan Lewis Kennedy, does the major part of organizing and promoting the event, trying to make it “as big an event as we can fit here,” Joan said.

As if all this were not enough, Muldoon said 50 percent of the tailgate spots for the match are purchased by the Lewises. “Even the players donate money,” he said. “We all support this one way or another. Everyone enjoys it. It’s a fun event. It’s not your typical black-tie event. Polo is only part of this, but it’s a reason to get here.”

The event has grown to attract more support each year. This year’s match set team sponsors Chesapeake Corporate Advisors of Baltimore and Court Place Advisors of Ellicott City against each other. Among other supporters in attendance were Sen. Allan Kittleman, the Ellicott City Rotary Club, and Lucky Cat Rescue in Baltimore.

Muldoon added the event is truly “a family affair, because the only polo match the Lewises get to play together is this one.”

Three of the Lewis family’s 10 children, Jim, Ted Lewis, and Joan, played in the match. Jim received the day’s sportsmanship award. Ted, who became the day’s MVP, flew in for the event from his home in Arizona.

Joan, only in her second year of play and trying to build up her skills, scored two of the winning Court Place Advisors team’s nine goals.

Other siblings made trips from Massachusetts, Pennsylvania, and Virginia to watch the event.

The final score in favor of Court Place Advisors was 9-4, and both teams on their horses did a lap around the field after the match. Mary Agnes Lewis, who reminded everyone next year’s match will happen June 11, presented the trophy to the winning team.