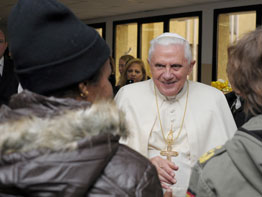 VATICAN CITY – They welcomed him with a red paper garland, smiles and a few whispered words about themselves.

Pope Benedict XVI’s 45-minute visit Jan. 4 to the Vatican’s shelter for the poor and homeless was distinctly simple and low-key. It began with a song about Jesus, sung by the Missionaries of Charity sisters who run the institution.

In the small, crowded women’s dining room, an atmosphere of quiet dignity prevailed. The pope greeted each of the women personally, and they shook his hand or kissed his ring.

This was not a media event, and the pope didn’t dish up soup or wait on tables.

“I am here to tell you the pope loves you and is close to you,” he said in a brief talk. To the roomful of women who have fallen on hard times, he said he wanted to remind them that “God never abandons us.”

The pope paused in the men’s dining room just long enough to wish the group “Have a nice lunch!”

Then he visited the quarters for sick women. They told him the names of their native countries: “Poland,” “Somalia.” Almost all were non-Italians.

“How are you?” said an African woman who could not get up from her bed. As the pope blessed her, she slowly made the sign of the cross.

Authorities estimate Rome has some 3,000 homeless people, and it’s been a cold winter for them. Two froze to death Jan. 1. At the Vatican shelter, the pope left practical gifts for the guests: food and blankets.

The 74-bed hostel was opened 20 years ago by Pope John Paul II as a gift to Blessed Mother Teresa, who had lobbied for such an institution at the Vatican. It offers warm meals for men and women and a female dormitory.

Pope Benedict, who stood beneath a picture of Mother Teresa, recalled that when he was a cardinal his office was next door to the shelter, and he became aware of the important work the nuns were doing there.

“How many gestures of sharing, of concrete charity, have been accomplished over the years inside these walls,” he said.

Along with material assistance, he said, the staff communicates “that same passion for Christ and that luminous smile of God that animated Mother Teresa.”

The visit highlighted one of Pope Benedict’s favorite themes: personal charity as the ultimate expression of faith in Jesus Christ.

In Austria last fall, he told Catholic volunteers that love of neighbor is not something that can be delegated to the state or to institutions – it always demands a personal commitment.

In his 2006 encyclical “Deus Caritas Est” (“God Is Love”), the pope brought it down to the basics: “Christian charity is first of all the simple response to immediate needs and specific situations: feeding the hungry, clothing the naked, caring for and healing the sick, visiting those in prison.”

As pope, however, personal contact with the needy is not always easy. Every public papal event involves planning, security and protocol, and usually takes place under the glare of the mass media.

On his trips to Africa, Pope John Paul sometimes would make unscheduled stops to visit poor families in their huts. These off-screen events were fleeting, however; the papal motorcade was always waiting outside.

One way popes can “do charity” is by allocating money to worthy projects or organizations from Peter’s Pence, which is funded by a collection throughout the Catholic world.

In addition, the Pontifical Council Cor Unum distributes several million dollars each year to areas of need, particularly in support of relief efforts to disaster areas.

In 2007, for example, the council financed humanitarian aid to victims of a cyclone in Bangladesh, an earthquake in Peru and flooding in Mexico. In all, the Vatican funded relief programs in 35 countries.

Two other papal charitable agencies fund development projects: the John Paul II Foundation for the Sahel, which helps North African communities fight drought and desertification, and the Populorum Progressio Foundation, which aids indigenous peoples through hundreds of small projects in Latin America and the Caribbean.

The oldest existing form of papal charity is the Almoner’s Office, established in 1409. It responds to individual requests for assistance with expenses like medical or utility bills and rent.

Spanish Archbishop Felix del Blanco Prieto, who was named papal almoner last year, said Pope Benedict told him to “never let our charity be lacking” and to come to him personally if he needed additional funds.

“Every day we receive pressing requests from people in trouble: from the sick, from those who can’t pay the rent or the gas or light bill, from immigrants, from students and from people looking for work,” Archbishop del Blanco told the Vatican newspaper, L’Osservatore Romano, in a recent interview.

The archbishop said his office allocates funds after the petitioner’s situation is checked with his local pastor. The amount is generally between 100 and 500 euros (about $150-$750), and each year more than $2 million is distributed.

Most of those asking for financial help are individuals, he said.

“We’re here to give out a small, concrete assistance, not to finance great projects,” he said.

The Almoner’s Office is tucked into a courtyard on the north end of Vatican City. The Missionaries of Charity shelter stands behind the Vatican walls on the southern border. For those on the receiving end, these are essential institutions, but most of the thousands of visitors who stream to the Vatican each day don’t even know they exist.