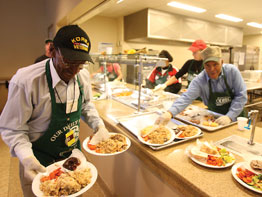 Not so long ago, Oredolapo Roberts lived in a four-bedroom house, owned a successful business and drove her kids around in a new Chevy Tahoe.

Then the economy faltered, her event-planning business went bust and the bank foreclosed on her home. In August, she and two of her children moved into Sarah’s House, the Anne Arundel County homeless shelter, where they have lived since.

“They lose their jobs,” Deacon Sullivan said, “and they’re coming to us and saying, ‘Can you help me? I’ve never been through anything like this before.’ ”

Even longtime donors now seek help for themselves and their families. At the Franciscan Center in West Baltimore, an elderly woman got surly when staff asked routine questions. Said the center’s CEO, Karen Hayward-West: “She blurted out, ‘I supported you since 1944, and now that I need help, I can’t believe you’re putting me through this.’”

Across the Archdiocese of Baltimore, the economic slowdown has struck harder and deeper than any in recent memory. It has rapidly increased the ranks of first-time jobless, homeless and hungry people and, in turn, strained the resources of charities, shelters, churches and food pantries.

Compounding matters, contributions from government and private sources as well as donations from individuals have declined as economic woes worsen and spread.

Unemployment is rising in Maryland, which, thanks to a strong government presence, has been relatively safe from spikes in joblessness that have hit harder elsewhere. The state’s jobless rate reached 5 percent for the first time in 12 years in October, the Labor Department reported, and economists expect an even greater percentage out of work in the months to come.

With the downturn, in many cases, the face of the needy has changed dramatically. Many got laid off from steady jobs, from laborers to executives, and some of them had college degrees. More children and families have become homeless. Shrinking retirement investments prompted some to re-enter the workforce. Families with children fill an increasing proportion of slots in homeless shelters.

The squeeze has left some unable to afford mortgage payments, rent, utilities, medical bills – or forced them to choose among these necessities.

At Sarah’s House, the shelter inside a former military barrack on Fort Meade, Ms. Roberts sits on a worn couch with other homeless mothers and recounts how quickly her definition of “homeless” changed.

“You know, when you hear that word ‘homeless,’ you tend to think of the disheveled person on the corner,” she said. “But, oh, no, these people are just like me. … To see a lot of families here just really blew my mind.”

Her business collapsed when companies and nonprofit organizations cut back on retaining her services to plan events like seminars, and she lost her Pasadena home. Ms. Roberts moved with her children to her parents’ nearby home. But when her mother’s medical bills increased and her parents could no longer afford to help support her and the children, Ms. Roberts sold her car and moved into Sarah’s House with her 7-year-old son, Malachi, and 6-year-old daughter, Omolayo.

On Dec. 1, Ms. Roberts began a new job in Washington at the nonprofit SEED Foundation, which helps prepare inner-city children for college. She takes a Sarah’s House shuttle to the MARC train, then transfers to the Metro.

Now she tells her children things will get worse before they get better and that they’ll have to forego luxuries like vacations or summer camp. She reads her Bible and clings to her faith: “Getting up to me is a blessing because that is another day I have to turn things around, to have that blessing bestowed on me that I know is out there for me that God is waiting to give me and my children.”

As soon as Ms. Roberts can afford a place of her own and leave the shelter, her space will be snapped up quickly.

Joyce Swanson, head of client services at Sarah’s House, said the demand far outstrips supply. In November, some 300 people were on a waiting list for 66 single rooms and transitional apartment housing for 22 families.

Janice L. Williams, development director at St. Vincent de Paul of Baltimore, said the number of homeless families has been on the rise in the city and surrounding county.

“The need is indeed acute and there are families who are now homeless and in need of emergency food assistance,” she said. “They are typically homeless for the first time.”

At St. Clement Mary Hofbauer in Rosedale, people who have lost jobs and have never been without food plead for help, but the food pantry can’t keep up with demand. Deacon Nick Feurer said in November that he’d been working with the pantry for 18 years.

“We never turned away anybody for food,” he said, “until last month.”

The economic meltdown could hardly have come at a worse time for charitable organizations. That’s because the squeeze could reduce the number of contributors and the size of gifts at the time of year when charities traditionally receive a substantial portion of their donations – around Christmastime.

At St. Vincent de Paul, Ms. Williams said, contributions had dropped about $200,000 in the fiscal year that ended Sept. 30 because of fewer donors and smaller gifts. Now, the agency waits anxiously for contributions.

“We’re holding our breath,” Ms. Williams said. “We just don’t know how many people have been affected in a way that their charitable giving is either not possible anymore or is going to be at a level lower than it was last year.”

At Catholic Charities, for the fiscal year that began July 1, contributions were expected to be down $500,000, or 5 percent, from the $10 million contributed last fiscal year.

In a video e-mailed to past contributors Nov. 25, Harold A. Smith, the agency’s executive director, said, “We need your support more than ever this year as we face a decline in government funding and a significant reduction in some of our private revenue sources, as well as an increase in the numbers of those seeking services.”

At Catholic Charities’ Our Daily Bread Employment Center on Fallsway, Tonia Robertson, clad in an orange sweatshirt and jeans, sat in a little office where the whiteboard on the wall reads: “Stable work. Stable home. Better Life!!! Always too soon to quit!!”

For five years, Ms. Robertson had a steady job making as much as $11 an hour as a food service worker for Aramark before getting laid off in October. She said she took pride in doing a good job and never missed work or came in late.

Now, at 42, she comes most days to eat the free breakfast and lunch and check in with her counselor, Kayce LaRose, placement manager at the Employment Center.

Ms. Robertson pays $500 a month rent to live in a single room in a house on North Avenue. She does her best to stretch the $362 in monthly unemployment benefits. She and others who live in the house recently unplugged the refrigerator and stove to save on utility bills.

“We just hope and pray the economy will turn,” Ms. Robertson said.

So does Deacon Sullivan at St. Francis de Sales in Harford County. He listened to the pleas like those from warehouse workers laid off in November, and one stuck his mind: