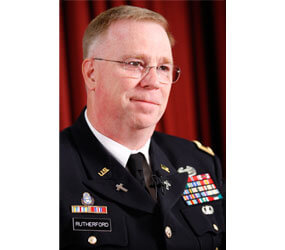 ARLINGTON, Va. – Soldiers “are making life and death decisions” every day in Iraq and Afghanistan, and military chaplains “are out there in the field with them day in and day out,” said the Catholic priest who is the new Army chief of chaplains.

“We are taking care of people who are most in need at a time they’re far away. We’ve had some soldiers deployed four and five times,” said Father Donald Rutherford, a major general and chief of chaplains since July 22.

“They are fighting for our freedom” and freedom “for other people to care for themselves,” Father Rutherford said in an interview with Catholic News Service in his office at the Pentagon.

The 56-year-old priest of the Diocese of Albany, N.Y., was nominated for the top post and a promotion in rank from brigadier general in February after serving as deputy chief since November 2007.

Despite the ongoing debate about the U.S.-led wars in Afghanistan and Iraq – and what has been one of the longest uninterrupted periods of combat in the nation’s history – surveys show that people rank the military higher than law or medicine as a profession, he noted. Less than 1 percent of the U.S. population is currently serving in uniform.

The country really needs “to support those soldiers that are there” and understand combat is only part of the story.

“We always hear about the war aspect, not the humanitarian,” he said. “When you go into a village in Afghanistan or Iraq … you can see the good our soldiers are doing.”

President Barack Obama announced in October that all U.S. troops will be pulled out of Iraq by the end of the year, bringing that war to end. More than 4,400 U.S. service members have died in the Iraq War; about 1,800 in Afghanistan.

Father Rutherford’s military career began with Army ROTC at Catholic-run Siena College in Loudonville, N.Y. He graduated in 1977 as a commissioned officer, but he put his military commitment on hold to attend the seminary. He was ordained in 1981 and also went into the Army Reserve.

After his bishop gave him permission to become an Army chaplain, he went on active duty in 1990.

His path to the Pentagon has included serving in the Persian Gulf War and in Iraq and Afghanistan. He has been with the 3rd Infantry Division and the 82nd Airborne, among other units. He has earned a number of decorations, including the Bronze Star.

“The Holy Spirit has a sense of humor and I guess so does the president,” Father Rutherford said of his appointment. “I really was humbled by it. I never thought this would happen.”

The priest came under fire when he was in Iraq in 2005-06, and the chaplain assistant who protected him there is still by his side, serving on his staff at the Pentagon.

“Chaplains go forward on the battlefield and they are getting shot at, without weapons,” Father Rutherford said, explaining that as noncombatants, chaplains are unarmed but “are well protected. … We always have a chaplain assistant with us.”

According to 2010 statistics, the latest available, the Army has about 2,900 full- and part-time chaplains. Among them are about 180 Catholic priests, with 99 priests on active duty. Many of these are older and several are retiree recalls. The chaplain corps also includes nine rabbis, six imams, two Buddhists and one Hindu; 139 chaplains are female.

In the Army, one in five soldiers is Catholic; only about one in 16 chaplains are Catholic priests.

A former recruiter of chaplains, Father Rutherford would like to see more Catholic priests consider the chaplaincy corps – “if you want to go out and do diverse ministry, work with people from various diverse backgrounds, want to meet people from different denominations, different views.”

He was pleased the U.S. Archdiocese for the Military Services recently reported that in the current academic year, 31 seminarians want to become military chaplains. Last year there were 23; in 2009-10 there were 12; and the previous year only three.

Among their many duties, chaplains assist in getting soldiers ready to be deployed, helping prepare them for separation from their families. They also are there to help them readjust to life back home when they return. Those assigned to serve in the field celebrate Mass for the troops there, hear confessions and provide counsel.

Besides the deaths and physical injuries suffered in Iraq and Afghanistan, the two wars have taken an emotional and psychological toll, leading to depression and suicide for some.

It’s a major concern for chaplains, who “are trained for this,” Father Rutherford said, explaining that the military has several programs in place, including one called “strong bonds” aimed at building relationships. It was developed over a 10-year period by the Army and the chaplains.

Another program, written by a chaplain, is called ACE, for “Ask, Care and Escort.” Each soldier receives a small laminated ACE card, Father Rutherford said, explaining the steps: “‘Ask’ your buddy what’s going on, and if they tell you something’s wrong, you ‘care’ for them and you do the best you can until you can … ‘escort’ them to get proper care either from a chaplain or health person.”

Also, the Army this year began a five-year study with the National Institutes of Health to assess soldiers’ mental health and well-being and identify factors that may contribute to stress or suicidal behavior.

Asked whether the end of the “don’t ask, don’t tell” policy, the ban on gays openly serving in the military, will impact chaplains’ work, Father Rutherford said: “We’re going to take care of the soldiers we took care of before. We perform and provide … and if you are unable to by your conscience, you would go and get someone to help them at all costs. We’re going to do just what we did for 236 years – take care of the soldier and their family.”

The windows of Father Rutherford’s office overlook the Pentagon Memorial, which pays somber tribute to the 184 people who lost their lives at that spot on 9/11. Another reminder of that fateful day is the chapel built inside the Pentagon during the reconstruction after the terrorist attacks.

“It’s part of the people’s lives” and is “used constantly” by all faiths, the priest said. “It shows the importance that faith has to the people who work here. It reflects our military.”