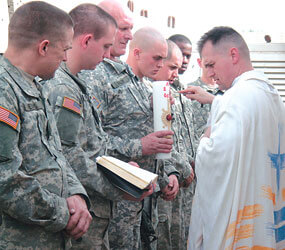 Father Paul Anthony Halladay is on a mission, to replenish the depleted ranks of Catholic chaplains in the U.S. Army. His pitch is backed by experience in the line of fire, a brush that earned him a Bronze Star.

“The Army needs 500 priests to take care of the service’s members,” Father Halladay said in a recent interview. “We only have 108 now.”

In residence at St. William of York in Baltimore, Father Halladay is assigned to the Chaplain Recruiting Branch of the Army at Fort Meade.

In their last summer before ordination, seminarians who are considering the Army are invited to spend three months in chaplain school as a way of discerning whether this is the path they should choose.

Father Halladay, who was ordained in 2000 and became a chaplain in 2004, can attest to the dangers they might face.

Beginning in November 2005, he served a year in Iraq with the 101st Airborne Division, the “Screaming Eagles,” in the Anbar province city of Ramadi. Time magazine called it “the most dangerous place in Iraq,” as American troops tried to gain control from insurgents and al-Qaeda.

Father Halladay was awarded the Bronze Star for aiding wounded Iraqi soldiers under fire after a suicide car bomb exploded 25 yards from where he was celebrating Mass on July 15, 2006.

In a building fortified with sandbags covering the windows, he was about to deliver his homily when a car was driven into a nearby checkpoint, setting off a homemade bomb.

“It blew the sandbags and glass out of the windows and sent a fireball through the room,” Father Halladay said. “Everyone was thrown to the ground. It shattered windows a mile away.”

No one at the Mass was injured, but Father Halladay ran into the street to help the wounded. As the citation for his Bronze Star read in part, he “assisted with casualty evacuation by carrying wounded men to safety under fire.”

Two months later, on the feast of St. Michael the Archangel, Father Halladay overheard radio transmissions about a gravely wounded Navy SEAL, a man who had asked Father Halladay to hear his confession when they first met.

He raced to the First Aid station where medics worked desperately on Petty Officer 2nd Class Michael A. Monsoor, a member of a combined Navy Seal and Army sniper team.

The team was on the roof of a house engaged in a firefight when an unseen insurgent tossed a grenade to the roof. In a split second, Monsoor made the decision that cost him his life, throwing himself on the grenade before it exploded and saving the lives of two colleagues.

Father Halladay prayed with the mortally wounded Seal as medics loaded him on to a helicopter for evacuation. In 2007, Father Halladay was invited to the White House to witness President George W. Bush’s presentation of the Medal of Honor to Monsoor’s parents.

In a time of priest shortages, Father Halladay, who holds the rank of captain, says the toughest part of the job is convincing bishops to release priests for military service. He recalls that it took him four years to persuade the Archbishop of Mobile to allow him to become a chaplain.

At the fall 2010 general assembly of the U.S. Conference of Catholic Bishops in Baltimore, Archbishop Timothy P. Broglio, of the Archdiocese of the Military pleaded with his fellow bishops to release more priests for military service.

Others who have volunteered for that role include Monsignor Carl F. Cummings, pastor of St. Jane Frances de Chantal in Pasadena, who served in the Navy, and Monsignor Joseph S. Lizor Jr., pastor of St. Luke, Edgemere, an Army chaplain.

This is adapted from an article that John B. O’Donnell wrote for the St. Agnes bulletin, where he is a parishioner.