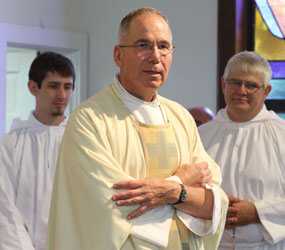 During the closing ceremony June 7, Father Wendel, an Army chaplain, stopped briefly at the reconciliation room, the 12th Station of the Cross, parts of the church important to Catholic spiritual life. From the baptismal font in the entryway to the statue of Mary near the front pew, he gave a prayer of thanks.

Standing in front of the doors of the chapel for the last time, Father Wendel said, “Although the service of the chapel has come to an end, we pray that you keep us ever mindful that wherever two or three are gathered in your name, your holy presence will be known. Accompany us as we move to new sacred places and new gatherings of your holy people.”

Indeed, people are ready to move on, but the ending remained bittersweet.

“We know a lot of people. I feel a big sense of loss having to leave the community. We should try not to get so attached, but it happens,” said Lt. Col. Ressie Harris-Delgado.

The chapel closed because the 488-acre military facility on the southwest edge of Atlanta is shutting down as part of national base closures approved in 2005. By September, it’s to be handed over to civilians. It was the first military installation in the Southeast when it opened in 1889. The post has served as a hospital during World Wars I and II, a POW camp and a training camp for the Civilian Conservation Corps.

The final Sunday Mass June 5 drew some 60 people, military retirees and those on active duty. Some churchgoers dressed in camouflage, while others were in summer casual clothes.

“Just by being a soldier, they understand your lifestyle,” said Harris-Delgado about the military parish. An extended absence can mean a deployment and the faith community understands that and reaches out to families, she said.

In the military, a soldier can put down roots in a faith community at a new assignment when everything else is unknown.

When people pray for soldiers in harm’s way, folks know what that’s about. The Lund children were nervous when their father was deployed to Iraq twice. When they pray for other soldiers, it is heartfelt, said Col. Eric Lund.

“Every one of us has done that,” he told The Georgia Bulletin, newspaper of the Atlanta Archdiocese.

With soldiers on the move every couple of years, friendships grow quickly among the people in the pews. Retired Maj. Charles Rickmond, whose late wife, Beatrice, was buried at the church, put it this way: “No one’s allowed to be a stranger.”

The chapel was erected in 1941, when the post was a stopping point for recruits entering the Army during World War II. During its early years, soldiers gathered in the building for meetings, religious education classes and worship services for different faiths. In 1958, it became exclusively used for Catholic worship.

From the outside, it looks like a country church with a small steeple. Its interior has exposed metal girder trusses holding up the roof. In the 1980s, stained-glass windows from the chaplain’s school at Fort Wadsworth in Staten Island, N.Y., were installed. Two windows were installed in the 1990s, done by the monks at the Monastery of the Holy Spirit in Conyers. The windows will remain with the building, but the rest of the religious icons are being distributed to other Catholic faith communities in the Army. Mass will continue to be celebrated on the base through July in the theater.

The military installation will be converted to a bioscience center to anchor future economic development. The chapel is located in what will be a research and laboratory district. Nearby Fort Gillem, in Forest Park, will stay a military facility, but will become smaller, with fewer military detachments.

Military dignitaries at the June 7 decommissioning included Col. Deborah Grays, the garrison commander, and Lt. Col. Robert Phillips, the garrison chaplain.
Grays told the audience that the building will close, but the history and countless people who worshipped within its walls make up the most important memories.

History may mark a building’s opening and its close, but “what does matter is what occurs between the years and you are part of that history,” she said. “All that has been witnessed here is essential to the soul.”