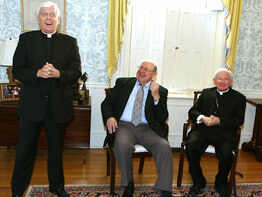 Samuel Chairs has always been generous supporting worthwhile causes – especially helping the poor and strengthening education. But the parishioner of Our Lady of Perpetual Help in Ellicott City recently decided to step it up a notch and encourage philanthropy among his seven children by donating $1 million to Catholic organizations through the Catholic Family Foundation.

Mr. Chairs, co-owner of a family construction company in Ellicott City, established the Samuel and Patricia Chairs Family Endowment Fund and seven other funds in the names of each of his children and their spouses, who will serve as guardians of the funds. Two of his sisters will watch over two additional funds he established.

Cardinal William H. Keeler honored the Chairs family for the contribution with a special Feb. 24 Mass and reception at the Basilica of the National Shrine of the Assumption of the Blessed Virgin Mary in Baltimore.

Mr. Chairs told The Catholic Review his late wife, Patricia, was the inspiration for his outreach. Mrs. Chairs died 10 years ago at Mercy Medical Center in Baltimore, one of the organizations that is among the beneficiaries of his donation.

A low-key man uncomfortable in the spotlight, Mr. Chairs said his children already support many causes. Serving as guardians of his established funds will give them even more exposure to organizations that make a difference in the community, he said.

St. Vincent de Paul of Baltimore is one of those groups that is especially dear to Mr. Chairs. After reading a profile in The Catholic Review of Sister Charmaine Krohe, S.S.N.D., former director of the society’s St. Ambrose Outreach Center in West Baltimore, Mr. Chairs contacted the energetic nun and became a supporter.

“It was unbelievable what she accomplished at St. Ambrose,” said Mr. Chairs, noting that Sister Charmaine led a successful capital campaign and expansion of the outreach ministry. “I told her I’d love to have her in my business.”

Mr. Chairs said he is happy his children will meet people like Sister Charmaine and learn from their example.

Todd Chairs, one of Mr. Chairs’ sons, will oversee a fund with his wife, Annemarie, benefiting the St. Vincent de Paul Society.

“It’s a great honor and I look forward to learning more about the organization,” said the younger Mr. Chairs, a parishioner of St. Mark, Catonsville. As a fund guardian, he said he would coordinate monetary distributions.